To shake up cancer SOC.

The approval of the first PD-1 blockade in 2014 ushered in a revolution to the way we treat cancer.  Six years later, Germany’s Merck aims to leverage its oncology armory to transform the standard of care.

In a recent press conference, Merck unveiled the three pillars of its oncology pipeline. The most exciting one is its immuno-oncology. Supported by positive data gained from early-phase trials, the German pharma giant is pushing its TGF-β and PD-L1 bifunctional protein to go head-to-head vs Keytruda (pembrolizumab) in a trial as a first-line treatment for NSCLC.  Elsewhere, Merck’s anti-PD-L1 agent Bavencio (avelumab) succeeded in UC trials and was approved in the U.S. in June for UC first-line treatment. “Together with the primary results of the study — the Phase III trial to demonstrate a statistically significant improvement in overall survival (OS) with an immunotherapy agent in the first-line setting — these additional analyses further support the use of Bavencio first-line maintenance treatment as a new standard of care for patients with advanced UC that has not progressed with first-line platinum-containing chemotherapy,” Luciano Rossetti, Global Head of Research & Development for Merck, told media. 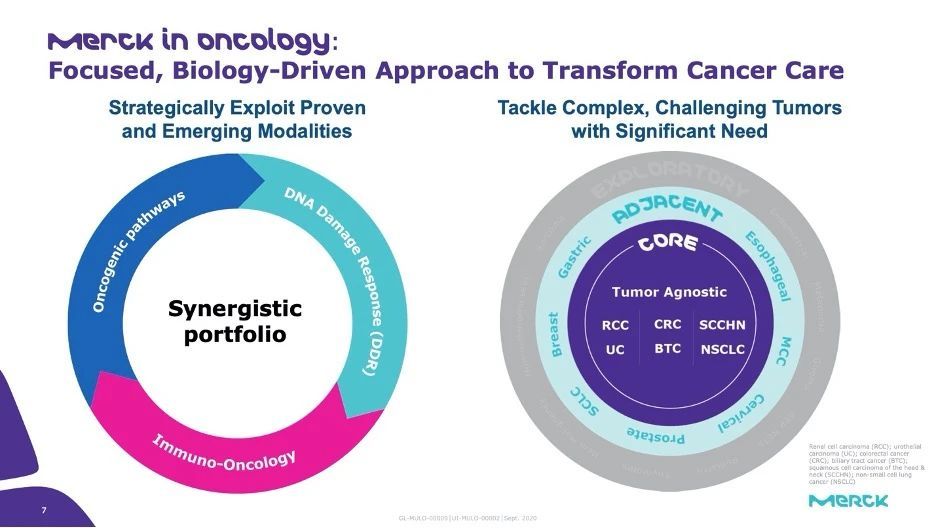 According to new data being presented at the ESMO, for the  Phase III JAVELIN Bladder 100 trial with 700 patients diagnosed unresectable locally advanced or metastatic urothelial cancer who did not have disease progression with first-line chemotherapy, the avelumab group that receives avelumab and best supportive care after a response of at least stable disease to first line chemotherapy shows significantly higher OS vs the control arm that only receives best supportive care in the same setting (Median OS 21.4 months vs14.3 months). “It shows an improvement in survival of 31%. It's the biggest improvement we've seen in any study in urothelial cancer, and it's happening across broad subgroups of patients,” Professor Tom Powles, Director of Barts Cancer Centre, told reporters at the press conference.

“These results support the US FDA’s approval of avelumab in the 1L maintenance setting and its inclusion in NCCN and ESMO clinical practice guidelines as a new standard of care for advanced UC,” added Powles, who also leads ESMO guidelines for bladder and kidney cancer.

While other PD-1/PD-L1 agents such as Keytruda, Imfinzi and Tencentriq are all struggling with bladder cancer, Bavencio is the only one of its kind that stands in the first line maintenance treatment. The design of the trial is the key for Bavencio’s win, according to Professor Powles.

Although, PD-1/L1 agents have changed the standard of cancer treatment, they only have a response rate of around 30%, meaning that far fewer patients benefit from it than those who do. The most likely reason for this lower response rate is that the tumor microenvironment is suppressing the immune system in many different ways.

TGF-β is considered as a resistance factor for anti PDx therapies. Merck has tested it in 14 Phase Ib expansion cohorts in more than 10 tumor types. Positive data collected from more than 1,000 patients has led Merck to question whether bintrafusp alfa can beat current cancer immunotherapies by blocking these two pathways at the same time.

Merck launched a head-to-head trial of bintrafusp alfa vs pembrolizumab in 2018. The estimated primary completion date is sometime in 2023, according to clinicaltrials.gov. In 2019 Merck initiated a partnership with GSK to co-develop and co-commercialize bintrafusp alfa. The two companies are testing the drug in seven Phase II/III clinical trials for different tumor types under its INTR@PID clinical development program. Merck has been marketing the first EGFR inhibitor Erbitux (cetuximab) in China as a treatment for late-stage CRC since 2005. It was approved as a first-line treatment for CRC , and it is also now reimbursed on the NRDL.

In March this year, Erbitux won another approval in China for its use in combination with platinum-based chemotherapy and fluorouracil, as a first-line treatment for recurrent and/or metastatic squamous cell cancer of the head and neck (R/M SCCHN).

The company presented new data for its c-Met inhibitor tepotinib to ESMO. tepotinib was approved in Japan in March and is under priority review by the FDA.

The third pillar of Merck’s oncology pipeline is the ‘DNA Damage Response’ (DDR) class. The success of PARP inhibitors recognizes that the mechanism that blocks cancer cells from repairing DNA damage can kill them. Merck is developing new DDR classes such as ATR, ATM and DNA-PK.

The ATM (ataxia-telangiectasia mutated), ATR (ATM- and Rad3-Related), and DNA-PK (DNA-dependent protein kinase) kinases are considered to be the most upstream DDR kinases.

Merck is investigating these DDR inhibitors in monotherapy and in different combinations with other DDR classes, immunotherapies and chemo- and/or radiotherapy. The leading ATR inhibitor berzosertib is currently subject to Phase II studies. “[…] the approach is basically that we hinder the cancer cells from repairing DNA damage until they have so much damage that they can no longer exist and die. As the cancer cells can often compensate blockage of one DDR pathway, we can either combine and block several ways, or focus on cancers  that already have mutations in, for example, ATM and treat them with ATR so they cannot escape. This is different from indication to indication, from cancer cell to cancer cell,” explained Dr. Johannes Nippgen, Merck’s Head of R&D Biopharma China, to PharmaDJ in an interview. 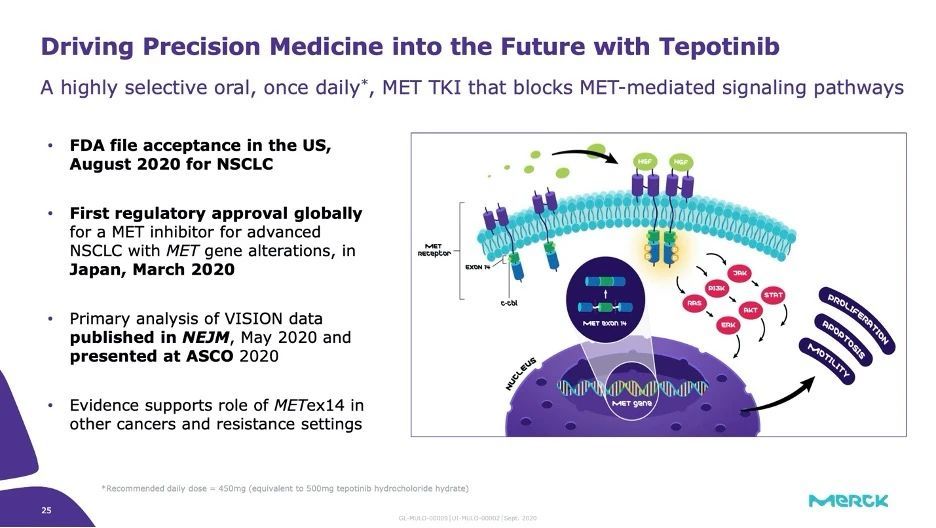 China is now the world’s second largest pharma market and a hugely important market for Merck.  Today, China is playing an increasingly important role in Merck’s global development program, according to Nippgen.

From 2016 to 2019, the number of Merck global studies conducted in China has quadrupled.

“Since Chinese regulatory potential began to appear, we have wanted to do simultaneous global development and include China in all our clinical trials. For Phase I trials, we usually do that in only one region. It’s often not ideal to do it in separate regions because you are firstly trying to see if the drug can be given to humans at all, or if it might be toxic or otherwise unsafe. From Phase II onwards, we’ll be evaluating the strategic rationale for including China in our trials,” said Nippgen, unveiling Merck’s bintrafusp alfa China development plan to PharmaDJ.

Asked about the rationale behind testing bintrafusp alfa head-to-head  vs Keytruda in the first line NSCLC trial, Nippgen said: “This is basically a trial where we have the potential to demonstrate the colocalized, simultaneous blocking of two nonredundant immunosuppressive pathways – transforming growth factor beta (TGF-B) and programmed death ligand 1 (PD-L1) The dual mechanism is thought to have an advantage over the single mechanism of a PD-L1 antibody only.”

“At the time when we were developing this mechanism of action, there were already some TGF β-targeting compounds in development but they were always stopped because they were too toxic. So one of the ideas was to combine TGF β and PD-L1, which are both key mechanisms of immunosuppression in the tumor microenvironment. So far, more than 1000 patients with various types of solid tumors have been treated globally in the bintrafusp alfa INTR@PID clinical development program.”

“And the other part is, of course, that if we are putting TGF β and PD-L1 together, then we will maximize the effect. Because if you are looking at PD-L1 inhibitors that are de-masking the cancer cells to the immune system, this means that, first, our PD-L1 inhibitor will put up the mask of the immune system, to let  the immune cells target the cancer cells. And when the cancer cells try to evade by, for example, signaling with  TGF β, which drives tumor progression by suppressing the body’s antitumor response, our bifunctional fusion protein is already where it should be to sequester the TGF β with its trapping component,” he said, noting that bintrafusp alfa is composed of binding sites for  PD-L1 and, “trapping” sites for circulating TGF β. Having these two mechanisms with two effector sites each in one molecule has the potential to be safer and easier to administer than two separate compounds.

“At ESMO 2020, we shared data that represent the longest treatment and observational period with bintrafusp alfa as a second-line treatment option for patients with NSCLC to date and further deepen the understanding of bintrafusp alfa’s potential long-term efficacy and safety. Three-year follow-up results from a global Phase I study (INTR@PID SOLID TUMOR 001) of bintrafusp alfa demonstrated a promising duration of response (DOR) and long-term clinical benefit, especially in patients with high PD-L1 expression, as well as a manageable safety profile in a setting of high medical need where there is no globally accepted standard of care.” Nippgen concluded.

“In addition to the head-to-head study, we have another trial in NSCLC (INTR@PID LUNG 005), which is evaluating bintrafusp alfa with cCRT in unresectable stage III NSCLC, where the patients do not yet have metastases, but may be likely to progress from their locally-advanced disease. We have a third lung study (INTR@PID LUNG 024) evaluating bintrafusp alfa in combination with chemotherapy in stage IV NSCLC.”

“Another indication - and this is the one that is probably one of the two most interesting indications for China -- is biliary tract cancer (BTC). We are conducting a trial of bintrafusp alfa as a monotherapy in patients with locally advanced or metastatic BTC who failed or were intolerant to, first-line platinum-based therapy (INTR@PID BTC 047). There is currently no globally accepted standard of care in the second-line setting and this patient population currently has high unmet need. We have included Chinese patients in that trial, so we are now waiting for the results before engaging with health authorities on next steps.”

Over the past decade, China has invested billions to grow local biopharma innovation. Merck has built two innovation hubs in Shanghai and Guangzhou to access emerging innovation in the country. The company announced a partnership with local biotech Junshi to investigate Junshi’s anti-PD-1 mAb toripalimab (Tuoyi) in combination with Merck’s Erbitux as a treatment for recurrent and/or metastatic squamous cell carcinomas of the head and neck (R/M SCCHN) in China.

“Because our avelumab is a PD-L1 inhibitor, we want to explore this additional mechanism to see if there's maybe a difference between PD-L1 and PD-1 and a combination in this indication. On the other hand, we also want to have a better stand in the Chinese market by cooperating with these companies and giving them the chance to develop their PD-1 inhibitor together with us,” Nippgen said.

“More and more of what we usually call local companies are already significantly globalizing. Just as Merck is a global company with German origins, it is likely that we will soon have to call many of these ‘local’ companies global companies with Chinese origins. ”

“What we are currently seeing is - just taking recent examples from press releases - companies like BeiGene and Hutchinson having FDA approval in the US even before the China approval of their compounds. Looking at that, I think there is great innovation potential now in the Chinese market. I think what we are seeing is the obviously visible part of the iceberg above the water. If you have a look at what is happening under the waterline and see what the early development compounds of many companies are, we will find even more innovation.

“I'm quite sure that in a couple of years, China innovation will no longer be so different from what we are seeing in the western world. This is also increasingly recognized…there might be a lot of interest in cooperation from their side and from our side, where we can then really do the development much better and much faster to bring these innovation compounds to patients earlier. Overall, I am very convinced of the innovation potential of these global companies of Chinese origin, backed by Chinese research,” Nippgen concluded.