But to limit this to only 3 awardees (‘the rule of three’) does not fully recognise the many more scientific giants who have contributed significantly to these breakthrough discoveries.

On a warm Chicago summer evening in June 2018 during the American Society of Clinical Oncology Annual Meeting, immunologist James Allison and his band - The Checkpoints - performed at one of America’s most famous jazz clubs – Buddy Guys. The mood was fun and celebratory. For those of us who were there enjoying the high energy performance by the Checkpoints -  a very cool group of world class immunologists who also happen to be great musicians - there was a palpable sense in the room that by October 2018, James Allison could win the 2018 Nobel Prize for Medicine and Physiology.

In 1992, James Allison was the first to describe the pivotal role of CTLA-4 that is present on the surface of T cells – as a negative regulator, an “off switch”, of the body’s immune system to prevent the normal immune system from attacking itself. By 1997, he and his team at UC Berkeley had developed an antibody to CTLA4 (anti-CTLA4-Ig).  In 1994, every one of his tumour-bearing xenograft mice given this novel drug became cancer-free. This landmark proof of principle was published in the journal Science in 1996, opening up a major new paradigm in the way drugs work against cancer. Most cancer drugs up to that point target the cancer itself (seed) and not the surrounding tumour immune microenvironment (soil). Here, Allison proved that by unlocking and releasing the biological brakes between CTLA4 and its other regulatory molecules on white cells – the immune checkpoints, a T cell could attack cancer very powerfully. This was the birth and foundations of targeting immune checkpoints against cancer. Summer 2018 : with the leadership of CAHON at the concert of James Allison and the checkpoints

When Ramy Ibrahim, Chief Medical Officer at The Parker Institute of Cancer Immunotherapy, visited Singapore in September 2018 and launched the Singapore Society of Oncology Cancer Immunotherapy Consortium as our guest of honour, we talked about who would likely to be the contenders if the Nobel Prize was awarded for cancer immunotherapy. There were many pioneers in the field and the Nobel Prize for Medicine and Physiology is only awarded to three individuals. Ramy was previously one of the pharmaceutical leaders at Bristol Myers Squibbs (BMS) responsible for developing and delivering the very first immune checkpoint inhibitor Ipilumumab to successful drug approval by the Federal Drug Agency (FDA) in 2011 – the first indication being in advanced melanoma.

Allison had huge headaches finding a drug industry partner to help take this antibody into clinical trials. Finally small biotech Medarax agreed to make a humanized monoclonal antibody against CTLA-4. BMS bought Medarax with this anti-CTLA4 antibody asset for USD$ 2.4 billion, in what has been hailed as one of the best biotech acquisitions of all time, and continued to develop this antibody all the way to FDA registration as Ipilumumab. Allison wanted the name of his anti-CTLA4-Ig to be called Hippi-lumumab, being a self-confessed weirdy beardy hippie scientist from the liberal UC Berkeley ! The roller coaster ride to FDA approval of Ipilumumab in advanced melanoma was a landmark achievement. Prior to that, there were no drugs, including chemotherapy, which showed any survival benefit against advanced melanoma. A uniformly aggressive and fatal disease when advanced, today there are even long term melanoma survivors (termed ‘supersurvivors’) alive and well for over ten years who have received Ipilumumab. Over 100,000 patients having received this drug to date. Among the early patients with terminal melanoma on the Phase 1 trial who received Ipilumumab, there was one young patient who achieved complete remission of all her melanoma and remained cancer-free for over 14 years. At Kyoto University in Japan, clinician-scientist Tasuku Honjo discovered the second key immune checkpoint Programme Cell Death (PD)-1 in 1992, when studying dying mouse cells. It turned out PD1 was often expressed in activated T and B cells, and found to be another powerful brake to regulate the immune system. Honjo later showed that knocking out PD1 in mice causes various autoimmune conditions, but nothing as dramatically fatal from immune self destruction as knocking out CTLA4 in mice – where massive lymphoproliferation happened. Methodical understanding of the PD1-PDL1 axis central to peripheral immune tolerance followed in Honjo’s lab and in the labs of others. In the context of evasion of the immune system by the tumor, this is a “don’t kill me signal.” Imagine the cancer to be Darth Vader from Star Wars, and he pulls out a light sabre called PDL1, and the T cell is Luke Skywalker, and he pulls out his light sabre called PD1. The two ‘light sabres’ PDL1 and PD1 lock together and Darth Vader tells Luke Skywalker, “Don’t kill me, I am your father.” If this hypnotic spell can be broken by an immune checkpoint inhibitor, The T cell can unlock and unleash its light sabre to kill the cancer.

Honjo’s team published the anti-PD1 antibody in tumour-bearing mice studies in 2002. Clinical trials began in 2006. Just like for Allison, getting pharma financing partners interested was like climbing Mount Fuji – a steep, Sisyphean uphill. Finally Ono Pharmaceuticals agreed to step in. This anti-PD1 inhibitor development would be jointly shared with BMS in what would become the lead candidate drug Nivolumab. By 2018 in just under 5 years, PD1 inhibitors would receive FDA approvals in over a dozen indications and cancers – remarkable progress and truly a revolution in cancer treatment.

Both Allison and Honjo share the 2018 Nobel prize for Medicine and Physiology. This is the first time a Nobel prize has been awarded for a specific type of treatment for cancer, if one does not consider the 1990 Nobel Prize to Donnal E Thomas for pioneering bone marrow transplantation. In 2017, Harvard University’s prestigious Warren Alpert Foundation honoured James Allison, Tasuku Honjo, Gordon Freeman, Arlene Sharpe and Chen Lieping in their groundbreaking work in understanding how immune checkpoints are central to cancer evasion of the immune system. Chen Lieping, then at the Mayo Clinic, was first to clone the B7-H1 (now known as PDL1), and published his findings in Nature Medicine in 1999. By the early 2000s, Chen showed that PDL1 was expressed on many tumour types and that blocking the PD1-PDL1 axis could be a potent anti-cancer therapy. He was a major force in driving the PD1 inhibitor into first-in-human cancer clinical trials. Gordon Freeman discovered the natural binding molecules for PD1 – the B7 family. Husband and wife Freeman and Sharpe elucidated that T cell exhaustion was a result of PD1 overexpression and overstimulation of T cells, and that an antibody that blocked the PD1-PDL1 axis could reverse T cell exhaustion. Twelve years ago, I attended the cancer immunology Keystone Symposium in the snowy Colorado mountains. Longtime collaborator of Freeman and Sharpe – the eminent immunologist Rafi Ahmed of Emory University - presented exciting work on how anti-PD1 inhibitors could reverse T cell exhaustion in chronic viral infections which could be used to treat human immunodeficiency virus (HIV) patients with the Acquired Immunodeficiency Syndrome (AIDS). These studies in viral infections did not work out well. But, surprisingly, those in cancer worked beautifully.

Today, cancer immunotherapy is one of the hottest things in cancer therapy. But back in the 1990s, cancer immunology, immunotherapy and research on the tumour immune microenvironment (TIME) were about as hot as an ice cream in winter. When I was a clinical fellow in hematology-oncology at the Massachusetts General Hospital in Boston in the late 1990s, we witnessed the most amazing clinical trial in oncology – Imatinib (Gleevec) for the treatment of chronic myeloid leukemia (CML). Every CML patient responded to Gleevec miraculously and the FDA approved Gleevec in 2001 for CML – still the fastest approval of a cancer drug in FDA history. This started the revolutionary era of targeted therapy for cancer. Since then, the next 20 years would see huge efforts and investments in developing targeted therapy against many cancers. In 1998, transtuzumab (Herceptin) was approved for the treatment of HER2-expressing breast cancer. Getting funding for cancer immunology research in the 1990s was tough, then considered more science fiction and a waste of time. Instead, the world was excited by the immense potential of targeted therapy. However, “oncogene addiction” exists in less than 15% of all cancers and outside of this, precision medicine really only benefits a minority of cancer patients. From 2009 to 2013, the Europeans Medicines Agency reported that only 26 of 68 cancer drugs approved had proven overall survival benefit - of only a mere 2.7 months median survival. Moreover, outside of true oncogene drivers, finding predictive biomarkers for targeted therapies has proven difficult.

‘Precision medicine is not a panacea; it’s a tool. And like all tools, it needs to be used appropriately. If not, it will not work.’

Meanwhile, back to the future of the 21st century. There has been unprecedented progress in defining biomarkers in immune-oncology (IO). Positive PDL1 expression, which, while not perfect, is predictive of immune checkpoint inhibitor benefit in some cancers. This has evolved to tumor proportion score (TPS) and combined positive score (CPS). Tumor mutational burden, microsatellite instable cancers also predict for benefit to IO therapy. New biomarkers to predict IO benefit continue to be validated : from simple ones like absolute lymphocyte count to much more complex ones such as the cancer immunogram comprising a collection of potential biomarkers.

The new revolution in cancer therapy from monoclonal antibodies against HER2, epidermal growth factor receptor (EGFR), vascular endothelial growth factor (VEGF), CD20 and more, to the IO therapies would not be possible without two of this year’s winners of the Nobel Prize for Chemistry – George P Smith who founded phage display, and Sir Greg Winter who improved on it to engineer the humanization of the monoclonal antibody – pioneered by his own mentor Nobelist the late Cesar Milstein. He is the founder of three antibody companies. In the summer of 2018, over a dinner at Trinity College, Cambridge University - that included monkfish and macadamia nut tart with pear ice cream, I asked Sir Greg what the secret sauce was to translating science to impactful medicines. Sir Greg believes that basic science, blue sky research, asking fundamental questions, rigorous scientific culture and inspired mentoring are vital ingredients. And he added, “Dream big dreams !” Sir Greg was determined to move humanized monoclonal antibodies into patients when he met a lady with terminal cancer. She had thanked Sir Greg for giving her hope through receiving his experimental monoclonal antibody to potentially extend her life even by a few months. She said to him she needed just a few months more to look after her dying husband. Sir Greg was very moved. 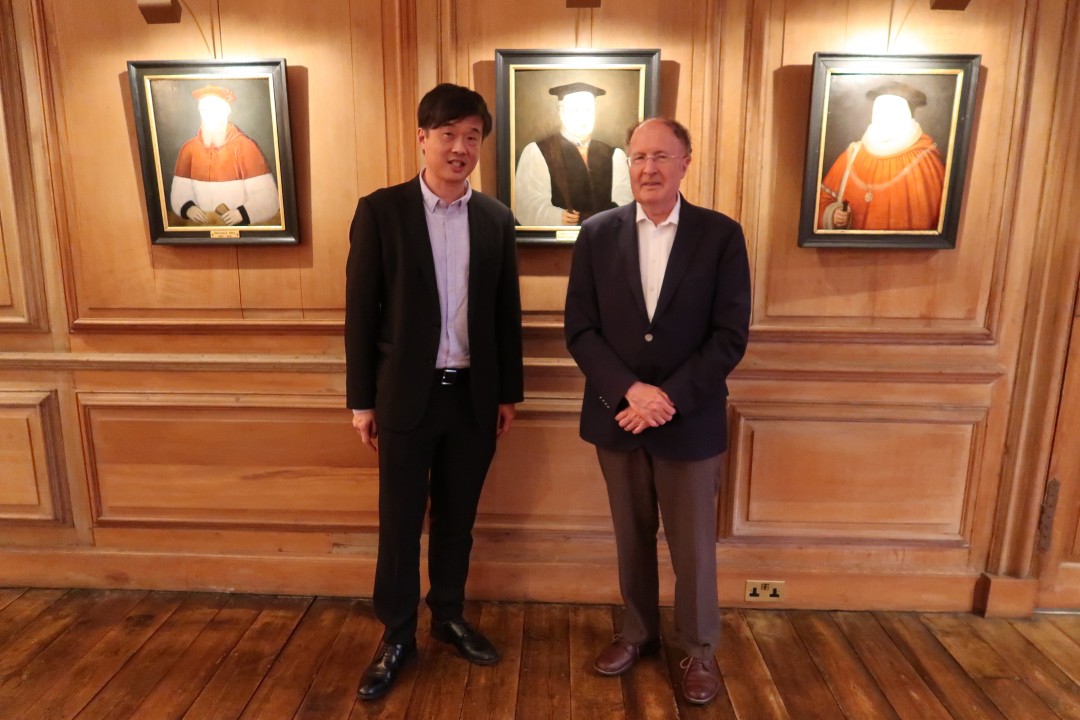 The Nobel Prizes in the Sciences reward the pinnacle of scientific achievements. But to limit this to only 3 awardees (‘the rule of three’) does not fully recognise the many more scientific giants who have contributed significantly to these breakthrough discoveries. In a global interconnected world of cross-border, international, multidisciplinary collaborations, Professor Venkatratnam Ramakrishnan – President of the Royal Society and winner of the 2009 Nobel Prize for Chemistry sums it up, “The rule of three is inappropriate to 21st century science.”

For this year’s Nobel Prize in Medicine and Physiology, I feel that the third winner should be from the field of T cell therapy, following the stunning results seen with chimeric antigen receptor (CAR) T cells in relapsed leukemia and lymphoma, and compelling results of T cells targeting new mutational antigens in solid tumours, even though in absolute terms, these are smaller number of patients benefiting.

May the Force be with Cancer Immunotherapy.