China’s biotech industry saw a dip in deal volume and value for innovative drugs in July after a rebound in the previous month. Chinese biotech companies made a total of 10 deals, with disclosed deal value amounting to over $1.5 billion. 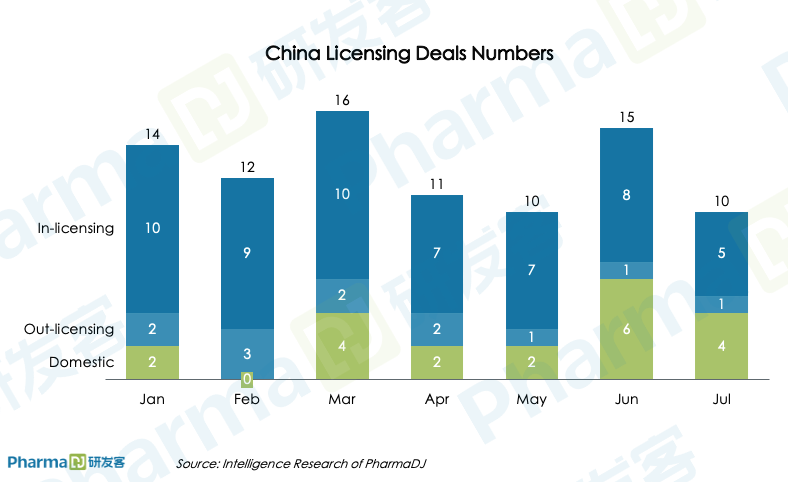 InnoCare Pharma came under the spotlight in July for inking the only out-licensing deal of the month. The Beijing drugmaker licensed out its oral BTK inhibitor, orelabrutinib, to Biogen for $938 million, representing 60% of the total disclosed deal amount of the month.

Under the agreement, Biogen will have exclusive global commercialization and licensing rights to orelabrutinib in multiple sclerosis (MS) indication. The BTK inhibitor has been approved for chronic lymphocytic leukemia/small lymphocytic lymphoma (CLL/SLL) and mantle cell lymphoma (MCL) in China, and it is now in a Phase II trial for relapsing-remitting MS patients.

Data demonstrated that orelabrutinib has better blood-brain barrier permeability compared to EMD Serono's evobrutinib and Sanofi's toleburtinib, which are being evaluated as potential MS therapies in Phase III trials. This could be the reason for Biogen willing to pay nearly $1 billion for the Chinese drug candidate, which is still in earlier stage of development. 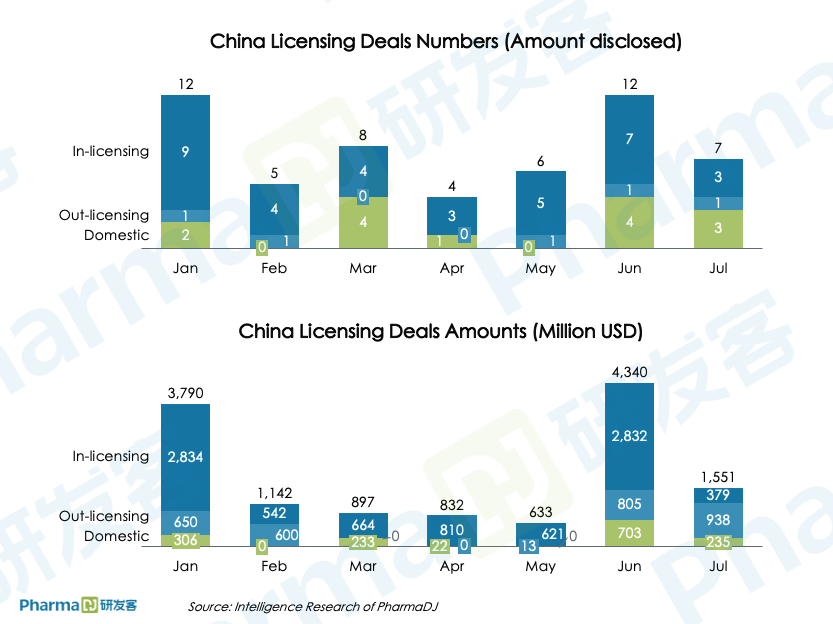 Chinese companies also showed signs in extending their interests from marketed or late-stage products to assets in earlier development stages, as two deals made between the domestic companies stood out with a significant deal value.

The first deal was a strategic collaboration between Ascentage Pharma and Innovent Biologics worth up to $145 million plus a $50 million investment.

Ascentage is expected to receive $30 million upfront and up to $115 million in milestone payments, while Innovent will purchase $50 milliion worth of Ascentage’s common stock and warrants to buy additional stocks of $50 million.

Under the terms, Shanghai Fosun Pharmaceutical Development, a subsidiary of Fosun Pharma, obtained the exclusive rights of registration and commercialization of Kintor’s proxalutamide for COVID-19 indication in India and 28 African countries.

Proxalutamide is a new-generation androgen receptor (AR) antagonist developed internally by Kintor. The company is studying the drug candidate as a potential treatment for COVID-19 in the U.S., South America, the European Union and Asia.

Kintor will receive upfront and milestone payments up to ¥560 million ($86 million) and royalties not less than 50% of the total operation profit in the collaboration regions.