China’s National Reminbursement Drug List (NRDL) lately has been getting a lot of attention lately. The NRDL determines which drugs will be reimbursed by the country’s health care system starting January 2022 – in other words, which pharmaceutical firms will be able to secure strong sales in China in the coming year. However, accessing public hospitals remains a challenge. The Dec. 10 update of the list included 67 branded drugs with no generic versions for the first time. On average, prices were cut by 61.7% — the biggest since 2017. Innovative drugs for oncology, infectious and rare diseases accounted for half of them.

The latest NRDL included a total of 2,860 drugs made up of chemical, biological and traditional Chinese medicine. Generics were directly included without price negotiations, while drugmakers with a branded product negotiated with the National Healthcare Security Administration (NHSA) on pricing every year to win inclusion in the NRDL. Negotiated drugs are covered in the NRDL for two years and can be renewed through new negotiations after expiration.

This year, drugmakers had an 80.3% success rate at getting on the NRDL.  Authorities said 94 out of 117 branded drugs won a spot in the list after price negotiations. Drugmakers have shown more willingness to compromise on price cuts, while authorities also began to recognize the pharmacoeconomics of new drugs. Regulators pursued “not the lowest price, but a reasonable price,” said Zheng Jie, Director of the Beijing Medical Insurance Affairs Management Center at a press conference on Dec. 10. Guidelines on pharmacoeconomics evaluation were also prepared to help the NHSA officials consider efficacy, safety and patient compliance in the price negotiations.

The 67 new drugs on the NRDL have gotten a lot of attention, because they indicate China’s support for biotech innovation. Over half of them are indicated for oncology and infectious and rare diseases.

27 of these new drugs were just approved this year; 41 of them are from domestic drugmakers. This demonstrates Chinese authorities’ efforts to make new drugs more accessible and affordable faster, as well as Chinese drugmakers’ improved R&D capabilities. Chinese drugmakers InnoCare and RemeGen, were able to secure NRDL inclusion for the first time with oncology drugs launched this year. RemeGen’s Aidixi (disitamab vedotin) was the first ADC drug approved in China, while InnoCare's Yinuokai (orelabrutinib) is said to be a best-in-class BTK inhibitor that was licensed out to Biogen in July.

In the competitive PD-1/L1 landscape, no foreign drugs made it to the NRDL. Keytruda (pembrolizumab) and Opdivo (nivolumab), which have been marketed in China since 2018, were excluded despite three attempts. Roche’s Tecentriq (atezolizumab) and AstraZeneca's Imfinzi (durvalumab) were also absent.

But their Chinese rivals — BeiGene’s Baize'an (tislelizumab), Innovent’s Tyvyt (sintilimab), Junshi’s Tuoyi (toripalimab) and Hengrui’s AiRuiKa (camrelizumab) — all managed to stay in the NRDL. Market watchers also expect Akeso’s Annike (penpulimab) and Alphamab/3D Medicine’s KN035 (envafolimab), which just won approval in the second half of this year, will try to squeeze onto the list next time. 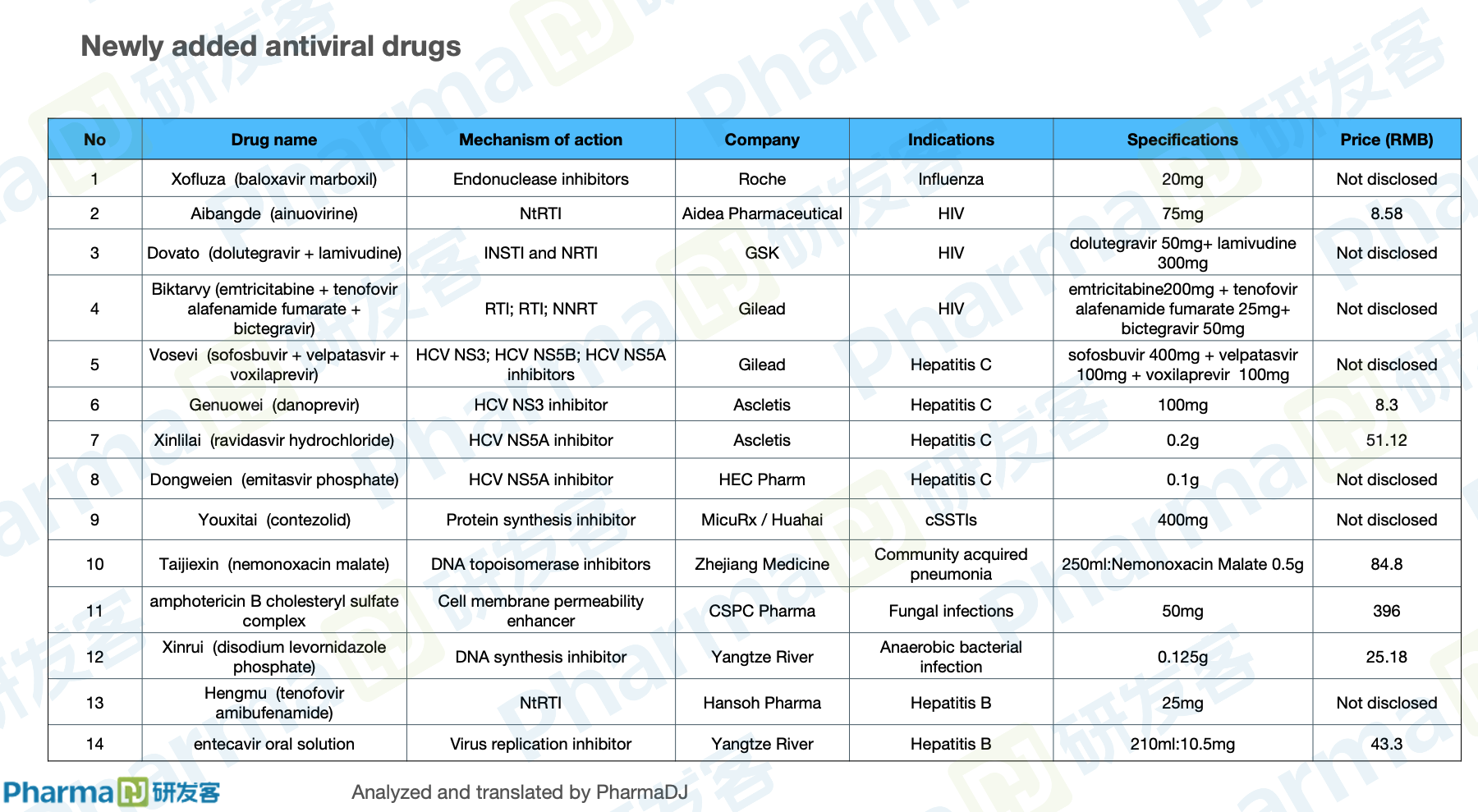 In the infectious disease space, several drugs for HIV, hepatitis C and hepatitis B made the list for the first time.

While the price tags of foreign drugs remain undisclosed, Chinese drugmakers were more open about their price cuts. Ascletis agreed to slash the price of Xinlilai (ravidasvir) by over 50% and Genuowei (danoprevir) by over 90%. Biogen's Spinraza (nusinersen) for spinal muscular atrophy was in the spotlight. To have it included in the NRDL, the pharma giant was said to have slashed the price of Spinraza by 94%, from RMB 550,000 to lower than RMB 33,000 per dose.

The long and painstaking price negotiation for Spinraza was captured in a video released by the Chinese state media. During the 1.5 hour-long talk with the NHSA, Biogen’s representatives reportedly left the table eight times to consult with its global office.

The aggressive price cut for Spinraza marks a victory for the Chinese authorities, as they have successfully leveraged the large market in China to lure drugmakers to significantly lower their drug prices. It remains to be seen if the market share can make up for the shrinking profit margins. Among the other 24 new drugs, one stood out most for its controversy. Green Valley’s GV-971 (oligomannurarate) was granted conditional approval for Alzheimer's disease based on phase III data from 818 patients that claimed the drug triggered a better score on the ADAS-Cog cognitive function scale over a placebo, but many have remained skeptical about the drug’s efficacy.

But as GV-971 has been approved since 2019 and treatments for Alzheimer's disease remain urgently needed, it managed to secure a spot on the NRDL with a price of RMB 296 per box, 60% lower than its original price.

The annual treatment cost of each drug in the NRDL is capped at RMB 300,000 ($47,000), said Zheng, adding that updating the NRDL is for satisfying the basic needs” of patients.

Yescarta currently costs RMB 1.2 million per treament, which clearly exceeds the annual cap set by the NHSA and appears too expensive for Chinese patients. This cast a shadow on the CAR-T space as drugmakers will still need to find ways to secure sales and profits.

To drugmakers, having products on the NRDL means stronger sales and faster commercialization, which help them reach peak sales quickly after the products’ launch. The profits can circle back to R&D to support more innovative drug programs.

But while the pharma industry celebrates the NRDL inclusions and patients are expected to pay a lot less for innovative drugs, challenges remain in actually bringing these drugs to patients due to regulatory loopholes.

Being on the NRDL does not immediately translate to entering the public hospitals. Drugs will need to be added to the hospital drug formulary through a long and complex selection process done internally by the hospitals. Meetings to discuss what drugs to include take place semi-annually, annually, or even once every few years.

As hospitals will have to remove some of the current drugs from their drug formulary to make way for the newcomers, smaller biopharma players will find it more challenging to get their products on the drug formulary.

To address the issue, Chinese authorities now allow designated retail pharmacies to sell drugs included in the NRDL while these drugs can be provided in public hospitals — a measure dubbed as “double channel”. However, to buy these drugs in retail pharmacies, patients will need to present prescriptions, which hospitals remain reluctant to give out.

Last month, the NHSA announced plans to implement a diagnosis-related group (DRG) and diagnosis-intervention packet (DIP) payment model in all hospitals with beds by the end of 2025. The model is expected to cover all indications and health insurance funds.

The DRG/DIP payment reform is poised to encourage hospitals to pursue more economical therapies and drugs, which will force innovative drugmakers to consider not only the clinical value of their drugs but also their pricing.