By Shi Yingzi and Chu Minhua

As China battles its worst COVID outbreak, investors have turned their attentions to RNA-based therapies again. But this time, companies are flogging their platform technologies rather than specific programs.

In March 2022, mRNA firm InnoRNA closed a $120 million Series B round while SiRNA specialist Argo Biopharma raised over $63 million in Series A funding. METiS Pharmaceuticals, which uses AI to aid drug discovery and targeted delivery, netted $150 million to be the biggest fundraiser of the month.

Together, the trio secured $333 million out of $820 million that PharmaDJ recorded for the month of March. These companies were the ones with the most funds raised for the month, and all have vowed to compete with their platform technologies, while keeping their pipelines undisclosed. Argo Biopharma, founded in April 2021 in Shanghai, is not shy about challenging U.S. leading siRNA player Alnylam, who was the first to utilize GalNAc delivery technology.

Alnylam holds a patent for Markush structures and the precise structure of GalNAc since 2008, which extends to using GalNAc in RNAi delivery. The patent was included in the Orange Book, the U.S. FDA’s list of safe and effective patents, after Alnylam’s Givlaari (givosiran) was approved for marketing in 2019.

But the Shanghai biotech firm wants to shake things up. Focusing its work on developing a GalNAc delivery system and extra-hepatic siRNA delivery system, Argo Biopharma boasts longer-lasting efficacy for its candidates that can challenge Alnylam. It said it has obtained several patents on its technologies, but little has been disclosed for now.

With $63 million under its belt, Argo Biopharma now hopes to move multiple programs into the clinic by 2023 to treat cardiovascular and rare diseases.

Meanwhile, InnoRNA and METiS are hoping to compete in the liposome nanoparticles (LNP) space, which could see challenges set by Arbutus Biopharma.

Looking to create a new generation of LNPs, InnoRNA has a library of nearly 5,000 LNPs that can be used to screen LNP carriers suitable for different treatments. The fresh $120 million is expected to help the firm continue its research in mRNA-based therapies, especially a vaccine candidate for COVID-19.

METiS, on the other hand, said it has developed an LNP delivery system that is ten times more efficient than industry standards. The technology can enable targeted delivery to multiple organs and tissues such as the liver, lung, spleen and muscle. 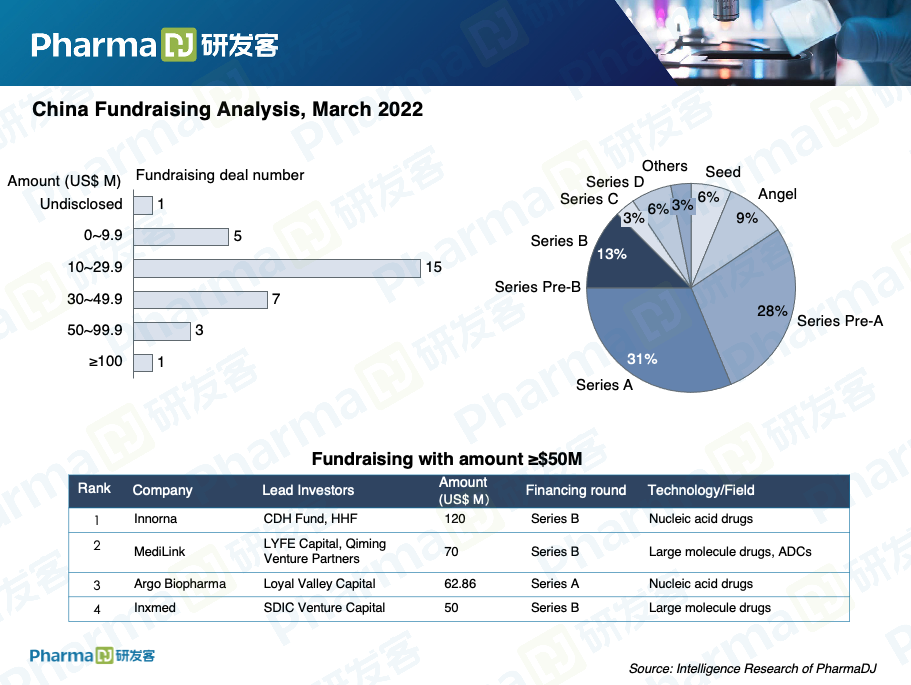 Among the 32 financing rounds recorded by PharmaDJ, 24 of them were Series A and even earlier rounds. Argo Biopharma’s $63 million Series A marked the biggest financing success for an early-stage company.

Nutshell Therapeutics, which specializes in allosteric drug activators to treat cancer, closed a $40 million Series A+ round. Gene therapy specialist Grit Science and cell therapy firm Yuesai Biotech each raised over $30 million in a Series A and Series Pre-A round, respectively.