The NMPA’s run of speedy approvals continued in the last month of 2021 as Chinese regulators granted the first marketing approvals to 16 new drugs and accepted NDAs for 11 more new ones. 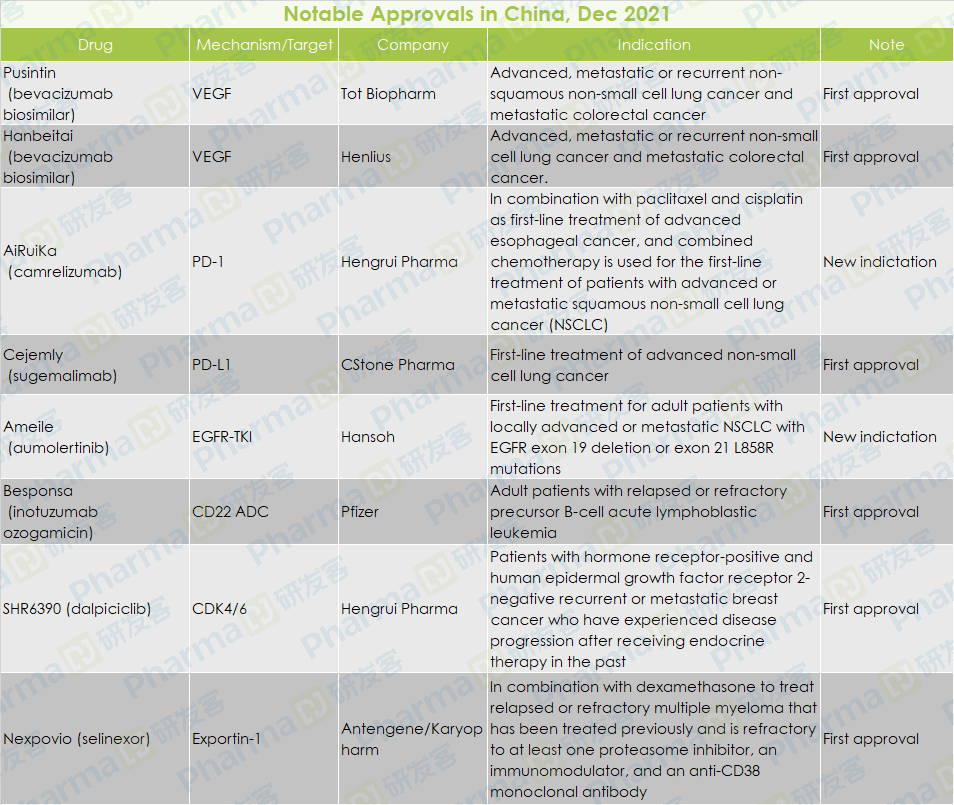 Last year, CStone formed a strategic collaboration agreement with Pfizer that includes the development and commercialization of Cejemly in mainland China.

Another drug is Hansoh Pharma’s Ameile (aumolertinib), which was developed for first-line treatment of advanced or metastatic NSCLC with EGFR exon 19 deletion or exon 21 L858R mutations. Ameile was first approved in China in March 2020 for patients with second-line NSCLC, making it the country's first homegrown third-generation EGFR tyrosine kinase inhibitor (TKI).

In the same month, Sanhome submitted an application for SH-1028 (oritinib) to treat NSCLC patients with EGFR T790M mutation positive. Currently, there are four third-generation EGFR inhibitors in the China market and five competitors waiting for approval in 2022.

Earlier in the month, Junshi Biosciences filed one for toripalimab to be indicated for untreated advanced non-small cell lung cancer with negative driver genes.

Competition in the ADC space

This ADC consists of an anti-CD22 antibody and calicheamicin via an acid cleavable linker. It was approved for adult patients with relapsed or refractory precursor B-cell acute lymphoblastic leukemia.

Besponsa and Polivy had already been approved by the FDA in 2017 and 2019, respectively.

ADC research and development are becoming normalized in China. According to incomplete statistics from chinadrugtrials.org.cn, 96 clinical trials for ADC drugs are ongoing in China and more than 40 companies have already developed ADC drugs in China.

The NMPA granted Antengene’s Nexpovio (selinexor), a selective inhibitor of nuclear export (SINE) compound targeting exportin-1, conditional approval for patients with relapsed or refractory multiple myeloma who have previously received treatment and whose disease is refractory to at least a proteasome inhibitor (PI), an immunomodulatory agent (IMiD), and an anti-CD38 monoclonal antibody.

Antengene licensed the commercialization and development rights of selinexor in Greater China and other Asian regions from Karyopharm Therapeutics in May 2018.