April 2022 saw a number of foreign and licensed drugs approved in China, with the majority of them in oncology and rheumatology.

The biggest winner was Pfizer, with the new approved ALK inhibitor Lorbrena (lorlatinib)， as well as JAK1 inhibitors Cibinqo (abrocitinib) and Xeljanz (tofacitinib) that expanded a new indication for ankylosing spondylitis. Janus kinase (JAK) inhibitors have faced U.S. regulatory snags since the FDA issued additional black box warnings for them in September 2021 regarding the risks for serious heart-related events, cancer, blood clots and death when used to treat rheumatoid arthritis. The space saw more competitors delve into other rheumatic immune fields such as atopic dermatitis last year.

In April, Pfizer saw its Cibinqo (abrocitinib) cleared for its first indication – adults living with refractory, moderate-to-severe atopic dermatitis (AD), following AbbVie’s Rinvoq (upadacitinib) receiving its first approval for AD in January. Cibinqo is the fifth JAK inhibitor to hit the market in China and adopts a simultaneous global development and registration strategy, with the drug has received marketing authorization in EU, U.S. and Japan.

Separately, Rinvoq continued to expand its indication for the treatment of adult patients with active psoriatic arthritis. Previously, the drug had already been approved for the two indications of atopic dermatitis and rheumatoid arthritis in January and March. Also in April, Pfizer expanded Xeljanz (tofacitinib)’s indication to ankylosing spondylitis (AS), after the drug received the NMPA’s initial approval in March 2017 for the treatment of moderate to severely active rheumatoid arthritis. It is the first JAK inhibitor to be approved for use in treating ankylosing spondylitis worldwide.

Competition is also fierce amongst Chinese companies with originator JAK inhibitors, and they are differentiating their candidates by developing them for different indications. Hengrui's SHR0302 focuses on rheumatoid arthritis, ankylosing spondylitis and atopic dermatitis, while Zelgen's Jaktinib tapping to baldness and myelofibrosis.

The JAK market is also attracting new licensing deals.Lynk Pharmaceuticals signed an agreement with Simcere for JAK1 inhibitor LNK01001 in March 2022. Simcere will attain the commercialization rights for rheumatoid arthritis and ankylosing spondylitis indications in China.

Innovent’s Pemazyre (pemigatinib), a selective FGFR1, 2, and 3 inhibitor, received the green light to treat adults with bile duct cancer (cholangiocarcinoma) that has spread or cannot be removed by surgery. The drug was discovered by Incyte and licensed to Innovent for development and commercialization in Mainland China.

China biotech firm CStone Pharma signed an agreement with Pfizer to jointly develop Lorbrena for ROS1-positive advanced NSCLC in Greater China. It has since launched a phase II clinical trial in March 2022.

In addition, the approval for second-line treatment of locally advanced or metastatic ESCC gave BeiGene’s Baize'an (tislelizumab) its eighth indicaiton in China.

Blincyto (blinatumomab) has won conditional approval to expand its indication to pediatric patients with relapsed or refractory (R/R) CD19-positive B-cell precursor acute lymphoblastic leukemia (ALL). BeiGene licensed in the drug from Amgen in China under a strategic collaboration commenced in 2020 and the same indication for adult patients was cleared in December 2020.

April also saw some notable NDA submissions, mainly in the field of neurology.

EVT201 was originally developed by Germany's Evotec. Jingxin Pharma licensed in the development rights for China in 2010 and expanded its deal to include South Korea and other countries around the world last month.

As for foreign drugs, the NMPA accepted Novartis's marketing application for CGRP inhibitors Aimovig (erenumab) for the prevention of migraine headaches in adults; Zambon filled its first NDA for Xadago (safinamide), a monoamine oxidase inhibitor(MAO-B), for the treatment of Parkinson's disease (PD); and Eisai submitted a new dosage form marketing application for the anti-epileptic drug Fycompa (perampanel) with oral suspension. 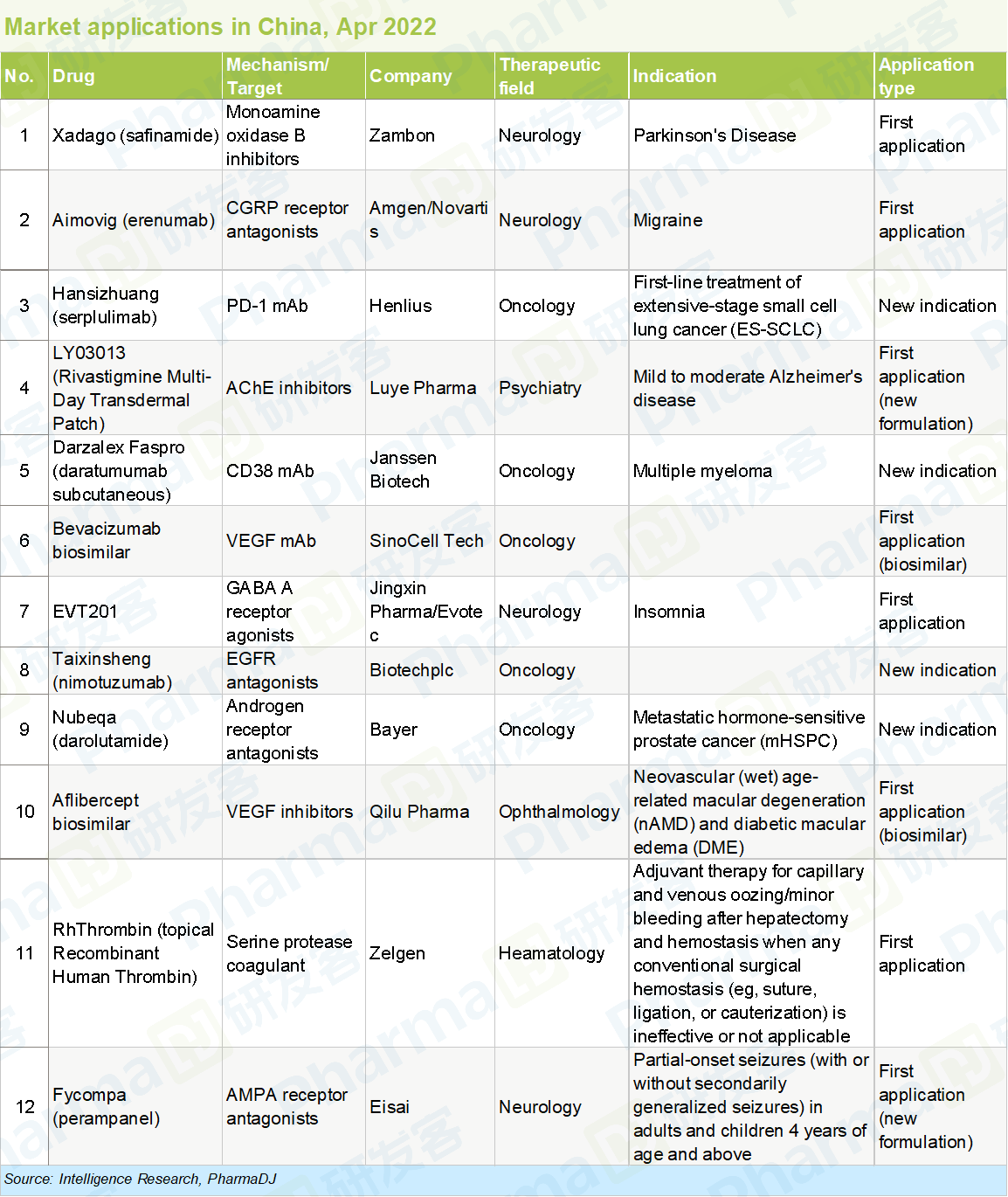