A Look at the Key Players in China's ADC Market

On August 9, Seagen, a world leader and pioneer in ADC therapies, announced that it entered into a global licensing agreement with China-based pharmaceutical company RemeGen for its antibody drug conjugate (ADC) drug disitamab vedotin. The deal was valued at for $2.6 billion. Under the agreement, RemeGen will retain development and commercialization rights for Asia, excluding Japan and Singapore, whlie Seagen will lead global development.

It’s the first out-licensing deal for an ADC therapies in China. This is just one of many signs pointing to a resurgence of ADCs in the country.

As of Aug 10, 2021, 79 ADCs are in clinical studies conducted by 27 local biotech company. Among them, 15 ADCs were in-licensing drugs, while the remaining 61 products were under independent development.

Most ADCs are being developed by domestic companies

Along with Hengrui Pharmaceutical and Miracogen, RemeGen is one of three companies taking a leading position in China's ADC market. Below is a brief introduction of these key players:

Remegen is in the top tier of ADC companies in China. Its core candidate disitamab vedotin (Aidixi) was approved by by China’s National Medical Products Administration (NMPA) in June 2021. Shortly thereafter in July 2021 RemeGen submitted a second new drug application (NDA) for submintion, a drug with great potential as a breakthrough first-line treatment for urothelia carcinoma.

Hengrui Pharmaceutical is another big player in this field. Currently, it has six drugs in clinical trials. Hengrui's fastest-developing drug, HER2-targeted SHR-A1811, is in Phase II trials for patients with non-small cell cancer, gastric and gastroesophageal junction (GEJ) and colorectal cancer. C-Met targeted SHR-A1403, Claudin 18.2-targeted SHR-A1904 and Kadcyla biosimilar SHR-A1201 are all in the Phase I clinical trials for solid tumors.

Miracogen, a wholly-owned subsidiary of Lepu Biotech, is a technological enterprise. The company has developed four ADC drug candidates. Of these, EGFR-targeted MRG003 and HER2-targeted MRG002 are in Phase II trials for solid tumors. CD20-targeted MRG001 is in Phase I trials for hematologic tumors. Moreover, MRG004A, one of the leading TF-targeted ADC products received IND approval from the Center for Drug Evaluation (CDE) on Aug 5, 2021.

The company has also been equipped with GlycoConnect™ and HydraSpace™, two  ADC technologies licensed from Synaffix in April 2019, to develop innovative ADCs.

As of August 10, 2021, China's biopharmaceutical industry has finalized seven ADC in-licensing deals since 2020 and three deals in H1 2021. 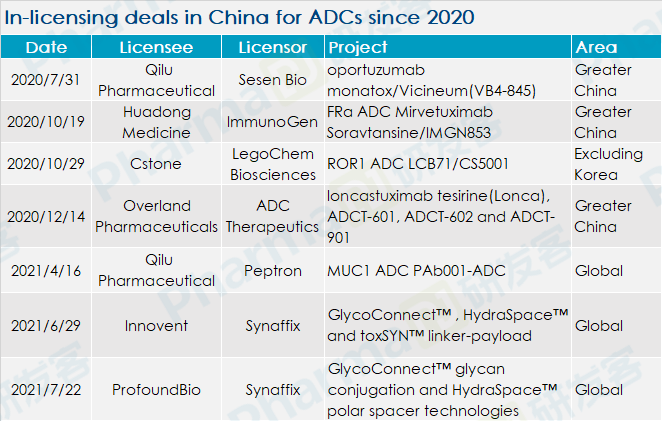 Everest Medicines' sacituzumab govitecan is the fastest developing in-licensing ADC in China, followed by Huadong Medicine’ IMGN853, Qilu Pharmaceutical’s VB4-845 and NovoCodex’s ARX788, which are all in Phase III trials.

On April 16, 2021, Qilu Pharmaceutical licensed its second ADC from Peptron. It's, a treatment called PAb001-ADC and targets MUC1, which is overexpressed in renal cell and nasopharyngeal carcinoma.

In June of 2013, NovoCodex, a subsidiary of Zhejiang Medicine, entered into a collaboration with Ambrx, using its unnatural amino acid technology to co-develop and commercialize ARX788, an HER2 targeted ADC. The company continue a second project of CD70- targeted ARX305 in October 2019 with Ambrx.

On July 22, ProfoundBio and Synaffix jointly announced a global licensing agreement for proprietary ADC technologies including GlycoConnect™ glycan conjugation and HydraSpace™ polar spacer technologies. Before this agreement, Synaffix signed deal with Innovent for the same ADC technologies, and provided Innovent one of its toxSYN™ linker-payloads on June 29, 2021. A Look at the Key Players in China's ADC Mark...