Newcomers from China to the 40th J.P. Morgan Health Care Conference highlighted their efforts in emerging areas. Belief Biomed is testing the first Intravenous infusion gene therapy for rare diseases in China, while Regor prides itself on speedy drug discovery that led to a $1.5 billion deal with Eli Lilly last year.

Established in 2016, Belief Biomed is developing gene therapy for genetic diseases with plans to extend into oncology. It said it is the only integrated gene therapy company in China with therapeutics, platform technologies and manufacturing facilities, and one of the few players with in-house manufacturing capabilities. In China, the rare disease market remains underpenetrated. Out of 162 orphan drugs that have been marketed abroad, 79 of them have not made their way to China despite a large number of patients in the country. Belief Biomed’s CEO Xiao Xiao has been in the gene therapy space for over 38 years. He was the co-founder of Bamboo and Askbio, which were acquired by Pfizer for $645 million in 2016 and by Bayer for $4 billion in 2020, respectively. With this proven track record, Xiao founded Belief Biomed in China in 2016 to tap the underpenetrated market.

The company has received over $ 50 million of investment from investors including Qiming Venture Partners, Lilly Asia Ventures, Sherpa Healthcare Partners. It now has over 300 employees.

Currently, Belief Biomed has 10 programs in its pipeline, including one in clinical trial and six in investigator-initiated trials. The company owns the global rights to all the programs. The candidate is a bioengineered AAV vector utilizing a recombinant AAV capsid, containing a codon-optimized human factor IX gene under the control of a liver-specific promoter. It has demonstrated high efficacy and safety with the FIX well-expressed in patient's plasma, and the company expects it can eliminate bleeding and liberate patients from regular treatment. That said, Belief Biomed remains tight-lipped on its data for now.

While its programs are still in very early stage, Belief Biomed boasts its in-house manufacturing capabilities, which puts it alongside with a handful of players such as Abeona, BioMarin and uniQure in the game. Xiao said the company is one of the leaders in CGMP AAV production.

Xiao himself invented the triple plasmid transfection system, which allows for a flexible switch between AAV serotypes.

Compared to other AAV manufacturing techniques such as Sf9 and HeLa, Belief Biomed’s HEK 293 is simple to culture and transfect, which shortens the production cycle with transient transfection process. There is no helper-virus contamination. The company adopts HEK293 suspension culturing. Post-purification production capacity can reach 2E16 vg/200L/batch in normal circumstances. It has 500L manufacturing bioreactors in use, and this will expand to 2,000L this year.

Belief Biomed also explained its AAV platform that it uses to develop gene therapy. With its capsid library that comes with numerous tissue tropism and specificity, its capsid development can transform how AAV vectors are delivered for monogenic and pathway diseases. Regor: one preclinical candidate in 10 months with rCARD platform

Regor, just founded in July 2018 with operations in Shanghai and Boston, quickly drew industry attention with its $1.5 billion multi-year pact with Eli Lilly to discover first-in-class candidates and license out its therapy candidates for metabolic disorders. Fast drug discovery is what sets Regor apart from others. In less than four years, the company has launched 15 drug discovery projects that cover oncology, immunology, and metabolic disorders and delivered seven preclinical candidates (PCCs). Its rCARD platform, which stands for Computer Accelerated Rational Discovery, is the key to accelerating drug discovery. 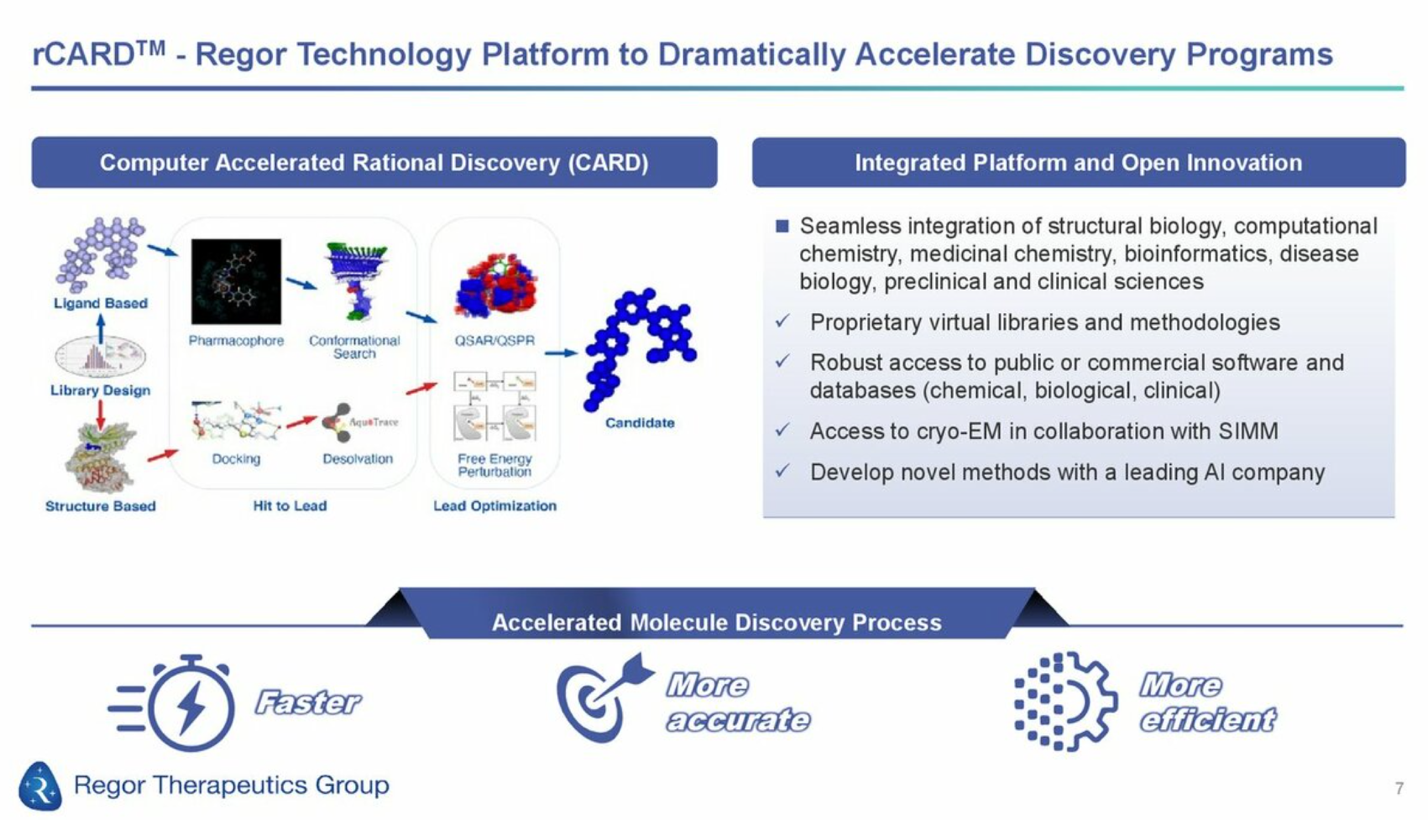 “It combines the best of artificial Intelligence and our human experience,” CEO Qiu Xiayang explained. “Not only we have integrated all these scientific disciplines on the proprietary technologies and databases, we have also built an open innovation platform where we can readily access our public or commercial Information and collaborate freely with academic institutions and industrial partners to develop cutting edge technologies.”

The rCARD platform showed promise. Regor was able to deliver each PCC in just 10 months by making only 200 molecules. “This compares very favorably to the industry standard of three to five years and 3,000 to 5,000 molecules per PCC,” Qiu said.

Regor has disclosed seven assets in its pipeline. Qiu said Regor will also retain the China rights to RGT-274 while out-licensing the external rights to Eli Lilly. The company is working on at least 10 discovery programs, many of which will have first-in-class opportunities. Its lead program is RGT-075, which just completed a phase I study in the U.S. and will enter phase II in the first quarter of this year. RGT-075 is an oral small molecule GLP-1R agonist derived from the rCARD platform. Early studies showed that it was well-tolerated and safe in adult healthy volunteers. In the first three months of 2022, RGT-075 will enter a phase II trial for type 2 diabetes, in which subjects will go through a 16-week treatment and be divided into six treatment arms. Regor will also test the candidate for obesity in a phase Ib study and expects to have the first subject in during the second quarter of 2022.