The month of March saw a string of approvals handed out by the NMPA, with the most significant being two domestically developed anti-PD-1 inhibitors getting green lighted to treat MSI-H/dMMR solid tumors in China for the first time ever.

Shanghai biotech firm Henlius celebrated the first approval of its internally-developed  Hansizhuang (serplulimab) for the treatment of adult patients with advanced unresectable or metastatic microsatellite instability-high (MSI-H) solid tumors that have failed to respond to previous standard treatments.

Separately, biotech giant BeiGene saw its Baize'an (tislelizumab) cleared for its seventh indication – advanced unresectable or metastatic MSI-H or mismatch repair deficient (dMMR) solid tumors. The drug can be used to treat adult patients with advanced colorectal cancer who had been treated with fluoropyrimidine, oxaliplatin and irinotecan, as well as those with other advanced solid tumors who develop disease progression after prior treatment and have no satisfactory alternative treatment options. For this pan-cancer indication, patients are screened for specific MSI-H tumor markers, rather than classifying the tumor types. They include endometrial, colorectal, gastric and ovarian cancer, as well as renal cell carcinoma.

Competition is fierce in this particular space in China, as there are more than 10 active clinical trials for MSI-H/dMMR solid tumors. Most are sponsored by domestic players who are testing their monoclonal antibodies that target PD-1, PD-L1 and CTLA-4, as well as bispecific antibodies.

To tap unexplored areas, new competitors have begun to seek indication differentiation and explore combination potential for their PD-1/L1 candidates.

Cervical cancer is another area that sees several competitors.

China has yet to approval any immunotherapies for this indication, while the U.S. already approved pembrolizumab and tisotumab vedotin for recurrent/metastatic cervical cancer in 2021.

In March 2022, Gloria Pharma filed the second NDA for GLS-010 (zimberelimab) – the sixth homegrown PD-1 antibody in China – for the treatment of cervical cancer. The drug received breakthrough therapy designation from the NMPA in March 2021.

The month of March also saw four drugs approved for the treatment of NSCLC. Among them are two ALK inhibitors, Takeda’s Alunbrig (brigatinib) and Betta Pharma’s Ensacove (ensartinib).

Takeda said the approval of Alunbrig marked its foray in the lung cancer space in China.

Chinese regulators also got their act together to issue speedier clearances for foreign drugs in additional indications.

They granted clearance to Roche’s Tecentriq (atezolizumab) as adjuvant therapy for NSCLC five months after their U.S. counterparts. Tecentriq is the frontrunner in the PD-L1 clinical development race in China. It is also the first immunotherapy approved for the treatment of NSCLC as adjuvant therapy in China.

Novartis’ Tafinlar (dabrafenib) plus Mekinist (trametinib), targeting BRAF and MEK1/2 separately, also got the green light to be used in combination to treat metastatic NSCLC that has a certain type of abnormal “BRAF V600E” gene.

Other competitors in China include HUTCHMED’s Orpathys (savolitinib) and Novartis’ Abrecta (capmatinib). Orpathys remains the only approved c-Met inhibitor since April 2021. 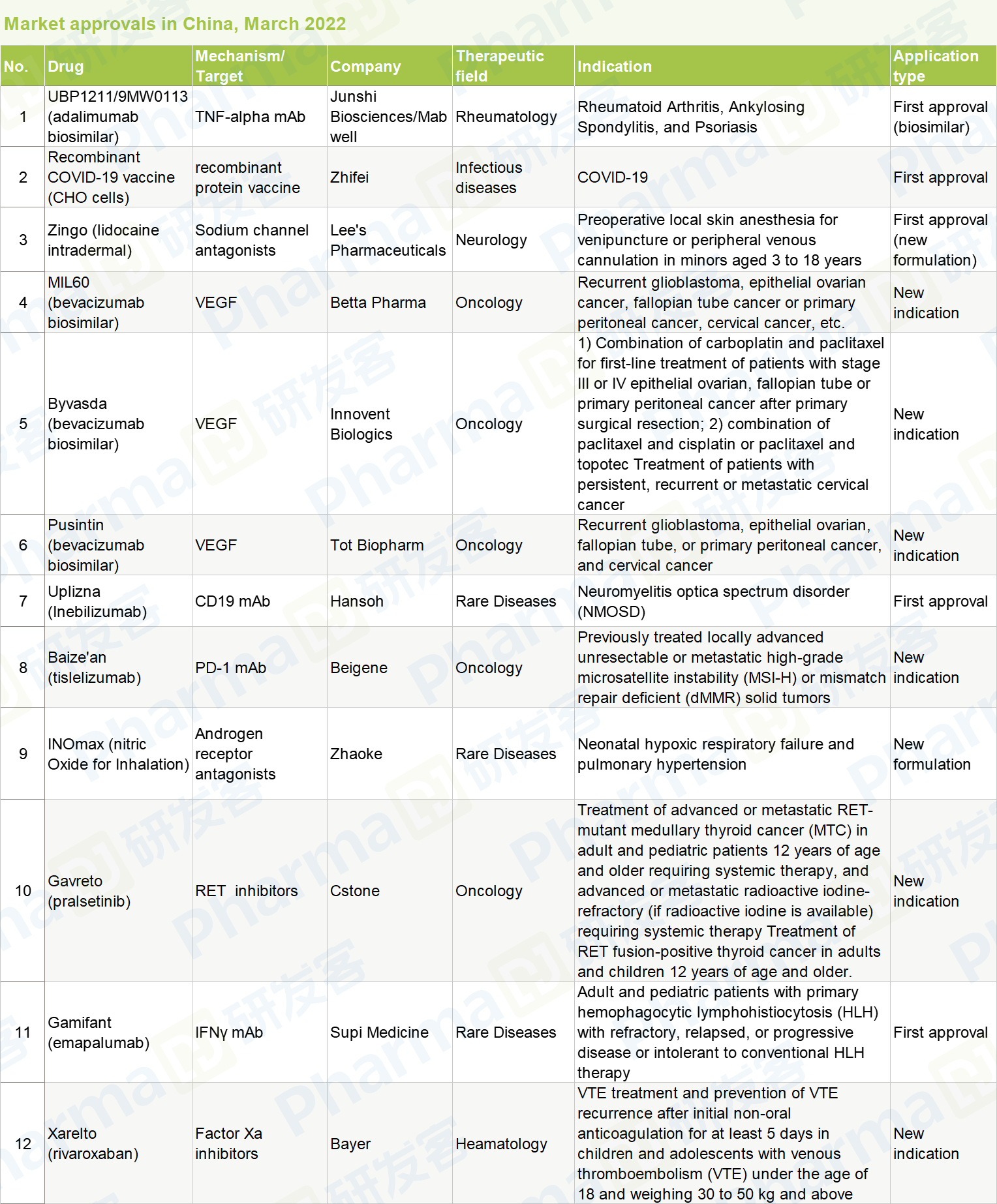 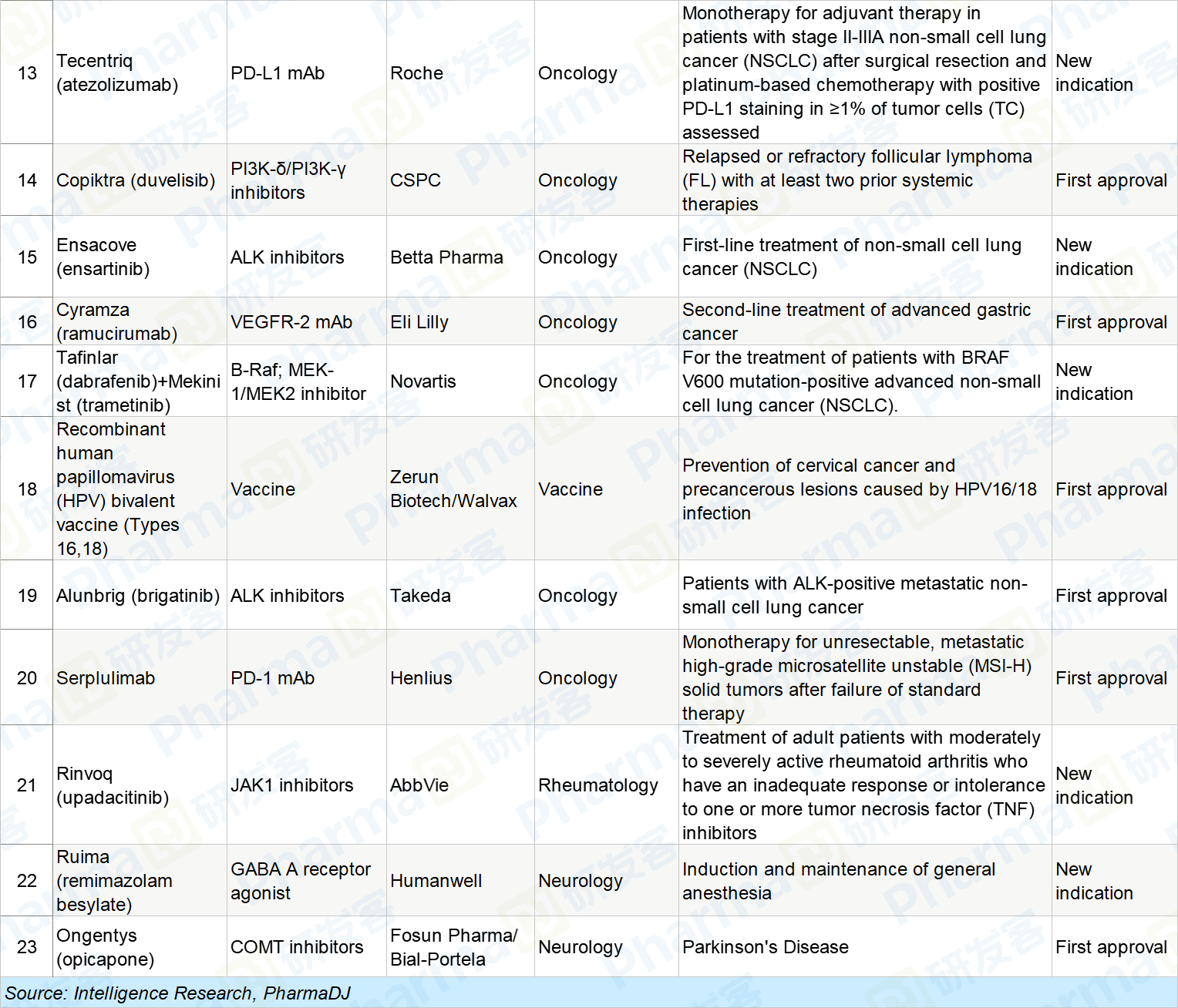