While biotech companies developing cell and gene therapies and nucleic acid drugs still made up most of the financing deals recorded in China in April 2022, a drugmaker specializing in medicines for children raising nearly RMB100 million ($15.7 million) shows a shifting interest toward this area. Beimei is conducting clinical trials for several products. Some are designed to improve the dosage forms, such as oseltamivir phosphate dry suspension, lacosamide oral solution, and posaconazole oral suspension.

To expand its pipeline, the company has been making licensing deals, with two since the beginning of this year. It licensed in a hyperphosphatemia drug from Netherlands-based Synthon, which offers greater convenience to children and those with dysphagia. It also added another drug from Dr. Reddy's Laboratories for ear canal infections in young children.

The interest in Beimei came as the Chinese government is giving drugmakers an easier start in pediatric drug development. Regulators announced measures to support the R&D and approval of these drugs by spurring drug innovation, encouraging clinical trials, granting faster review and approval, and covering them in the national medical insurance system.

As of December 2021, 91 pediatric drugs have been granted priority review in China. Approvals for pediatric drugs also increased from 26 in 2020 to 30 in 2021. These drugs were cleared for common diseases in children, such as influenza, rhinitis, and expectoration, as well as rare diseases such as infantile spasms, hyperammonemia, primary tyrosinemia, infantile hemangioma, and Gaucher disease.

Bayer’s rivaroxaban oral suspension was approved by the NMPA to treat venous thromboembolism (VTE) and reduce the risk of VTE recurring in pediatric patients from birth to younger than 18 years. The regulators also approved Santen’s Verkazia (cyclosporine ophthalmic emulsion) for vernal keratoconjunctivitis in children and adolescents over 4 years old.

These favorable policies have encouraged more investment into pediatric drug development in China during the past two years. ArkBio, Pediatrix Therapeutics and Zezheng Medicine all announced financing rounds in 2021.

The trio represent Chinese drugmakers that have showed advances in their R&D for pediatric drugs. ArkBio, for example, said its Ziresovir, a small-molecule RSV fusion (F) protein inhibitor, is the first anti-RSV drug that has successfully completed a phase III pivotal clinical study globally in infants hospitalized with RSV. Ziresovir, which has been granted breakthrough designation by the NMPA, could be the first China-developed pediatric drug.

Shijiazhuang No. 4 Pharmaceutical also announced that the stiripentol dry suspension developed by its subsidiary has been granted priority review. It is developed for the treatment of severe muscle tremor in children with epilepsy.

While there are over 3,600 prescription drugs available to adult patients, there are only 60 specifically for children. There is much room for growth in the pediatric drug market for new entrants. Most of these small funding rounds were for supporting cell and gene therapy, peptide drugs, nucleic acid drugs, and 3D microfluidic chips. China is seeing more new biotech startups that tap these advanced technologies to stay on the cutting edge with their foreign peers.

But as these technologies will still need time to be validated at home and abroad, Chinese investors remain cautious about their investments while having the fear of missing out. This has resulted in more smaller investments.

China is also seeing more newcomers in cell and gene therapy as well as nucleic acid drug development, as they made up half of the financing rounds below $4 million in April. Despite being in early stage, these startups already face a fierce competition in financing. 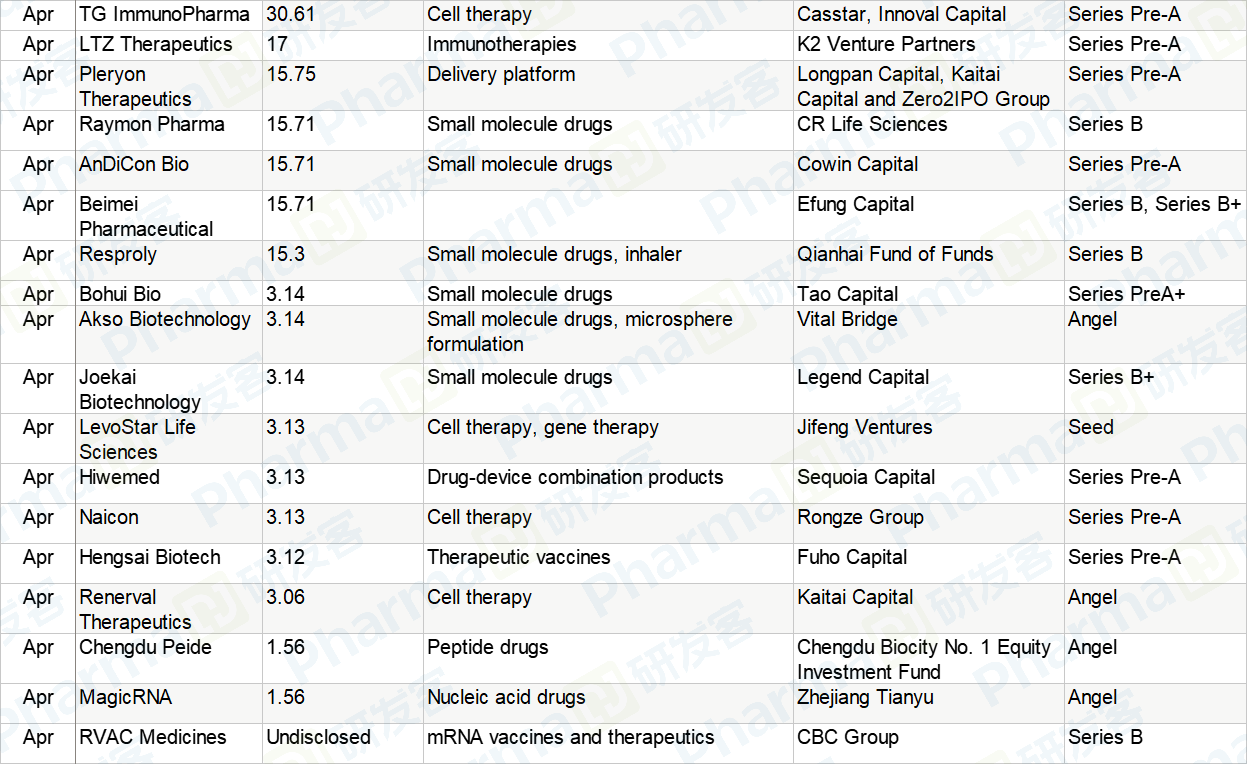