By Elise Mak and Shi Yingzi

The race between Chinese companies to develop an mRNA vaccine for COVID-19 is on, with at least 18 firms in the running. Yet, R&D and mass production issues present hurdles. 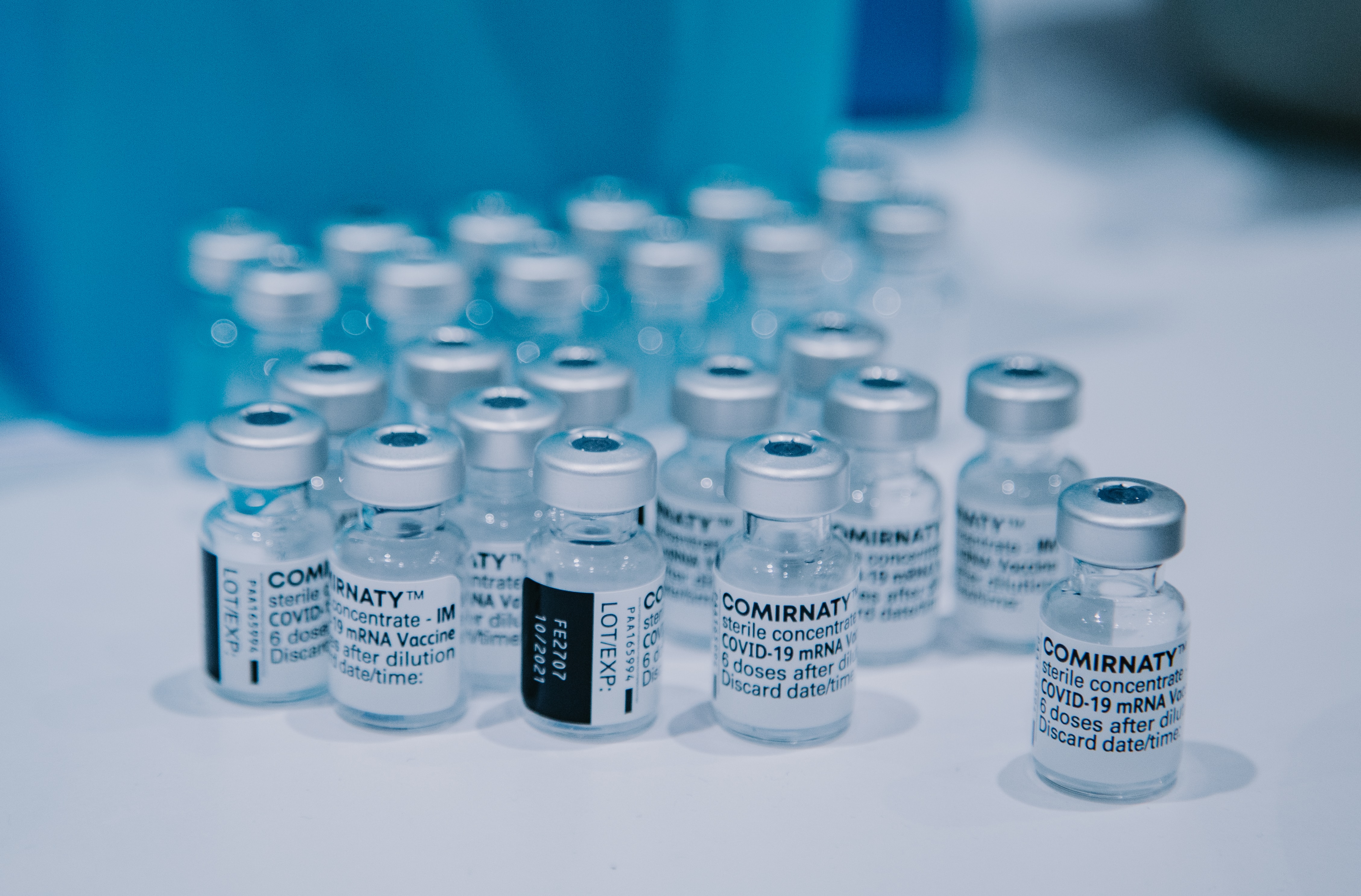 Chinese drugmakers are vying to produce a domestic “Comirnaty” as the Pfizer/BioNTech shot is yet approved in China.

Ever since mRNA vaccines proved to be a success for COVID-19, the technology has become the next big thing in China. New players are sprouting up, traditional pharma is getting involved, and investors are looking for the next Moderna in China.

At least 18 companies have announced plans to develop an mRNA vaccine for Omicron-stricken China. Many hope to use it as a booster shot for 1.4 billion people who have mostly received inactivated vaccines.

The authorities are stepping in, too. In April 2022, China Resources Pharmaceutical Group, a subsidiary of a state-owned enterprise, formed a pact with Everest Medicines to advance an mRNA vaccine in China, The candidate is licensed from Canadian firm Providence Therapeutics.

“The [Chinese] government has made it clear in public news that they care about alleviating the COVID situation, just as they have approved the Pfizer’s Paxlovid in China. We are in close communication with the regulatory bodies on clinical and regulatory approval process,” Everest CEO Kerry Blanchard told PharmaDJ.

He said CR Pharma will contribute “substantial resources” to help navigate any clinical, regulatory, manufacturing and commercial hurdles on top of “a monetary investment.”

For the past two years, many have hoped that Abogen and StemiRNA would launch a homegrown mRNA shot, but their candidates appear to be nowhere close to commercialization. Yet other players – even some that are inexperienced with vaccine development, let alone mRNA – have flooded the game.

A few days before the Everest-CR Pharma pact, CSPC and CanSino said their mRNA COVID-19 vaccines were cleared for clinical trials in China. PharmaDJ counted at least 18 of such programs in the country: 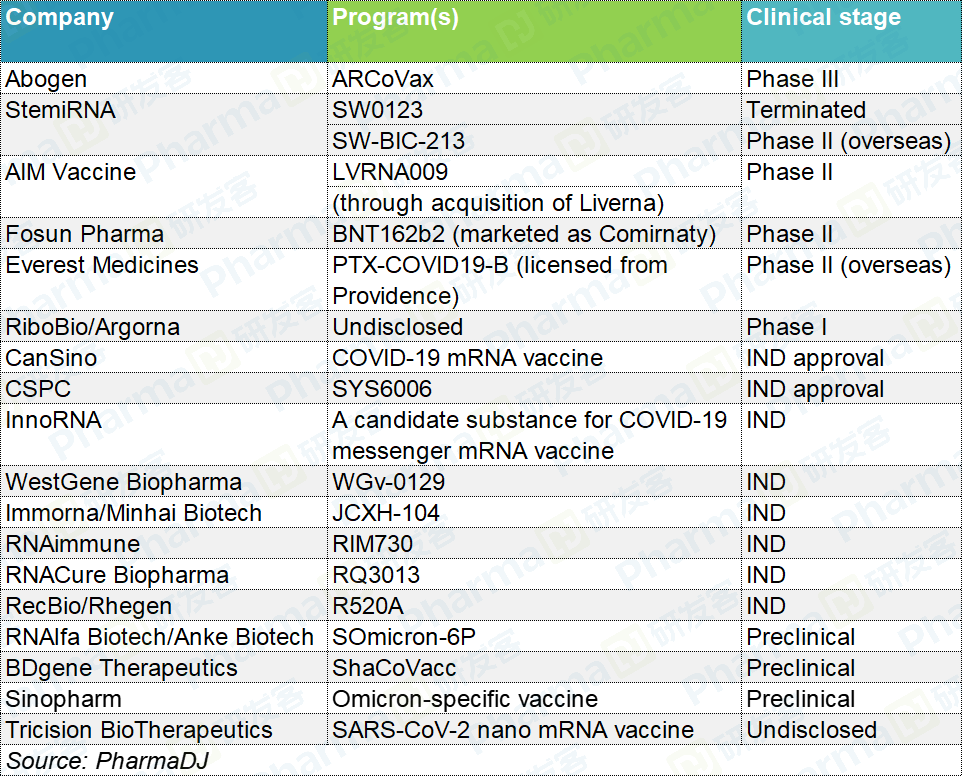 Vaccine makers CanSino, which has already developed a recombinant viral vector vaccine for COVID-19, is now exploring mRNA. AIM Vaccine, a main supplier of HBV and rabies vaccines in China, as well as RecBio, which boasts an HPV vaccine pipeline and an adjuvant platform, have also dipped their toes in the pool.

Fosun Pharma and Everest were quick to see the market potential of mRNA and have licensed in a foreign candidate for the China market.

State-affiliated institutions also play a part. Researchers from the Academy of Military Science are working with Abogen, while the Guangzhou Institute of Biomedicine and Health (GIBH) and Wuhan Institute of Virology under Chinese Academy of Sciences are partnering with RiboBio and AIM Vaccine, respectively.

In six years, the number of mRNA startups in China grew from zero to more than a dozen.

Other companies such as Tricision BioTherapeutics, BDgene and Longuide are also exploring mRNA.

Intense interest from investors has further fueled China’s mRNA boom. They have injected over $1 billion in Abogen, more than $250 million in StemiRNA, $135 million in InnoRNA, and more in numerous startups. Companies such as Everest and Junshi Biosciences also committed $500 million and more than $30 million, respectively, to mRNA partnerships.

Investors are hunting for the next “Moderna” in China, which could well be Abogen as its founder Ying Bo was a former employee at the U.S. firm.

An investor previously told PharmaDJ that Moderna’s $166 billion market cap helped float valuation for mRNA companies, including that of Abogen. It remains the mRNA titan in China with over $1 billion raised in one year.

As the mRNA sector thrives, Chinese players are maturing their platform technologies instead of just flogging a COVID-19 vaccine program. They seek breakthroughs in delivery carriers to challenge patent monopolies.

InnoRNA, for example, aims to create a new generation of liposome nanoparticles (LNP). To develop novel delivery systems faster, the company’s founder Li Linxian developed combinatorial methods that are capable of synthesizing many biomaterials in parallel, and fabricated microarrays as high-throughput screening tools.

The platform developed by Li is said to be able to generate libraries of more than 1,000 lipid particles in one day and identify safe, effective mRNA carriers for clinical treatment. Currently, the company has a library of nearly 5,000 LNPs.

However, Arbutus Biopharma holds patents tied to the LNP delivery system. As Moderna lost its bid to invalidate Arbutus's LNP patents, it remains to be seen how Chinese firms like InnoRNA can shake up the status quo.

Meanwhile, StemiRNA has chosen a different approach. It licensed a core-shell structured lipopolyplex (LPP) nano-delivery platform from Houston Methodist Hospital, which it claimed can protect mRNA better and release it more gradually as the polymers are degraded compared to traditional LNP platforms.

“By using the LPP technology, we will not have a potential risk of fighting for patent rights,” StemiRNA co-founder Shen Haifa told PharmaDJ previously.

But a China-made mRNA shot could still be far from reach, as the ability to mass produce such vaccines falls on a few global players.

BioNTech partners with Pfizer to bring its innovation to more than 120 countries, while Moderna gets help from Lonza, Sanofi, Thermo Fisher Scientific, Baxter, Catalent and Aldevron to manufacture billions of doses.

The mass manufacturing capability for commercialization remains a bottleneck for Chinese players. Since no Chinese mRNA shots are on market yet, many suspect companies are encountering technical barriers in scaling up manufacturing.

Currently, Chinese mRNA companies – which are mostly biotech firms – lack experience in scaling up the production of nucleic acid drugs and LNP carriers. Traditional pharma giants such as CSPC and Sinopharm are expected to help overcome the barriers with their CMC and mass production expertise. Talents with CMC experience in mRNA have also returned to China to join local companies.

“Currently in China, microfluidic techniques are mainly applied in IVD and tumor cell isolation… There are almost no players in LNP synthesis,” said Southwest Securities in a research report. It added that certain raw materials cannot be produced on a large scale in China.

“China has had a number of well-established biotech companies with advanced technologies. These companies are only part of an industrial chain,” he said. “The country still relies heavily on imports in many parts of vaccine development and production.”