Though China still requires that foreign companies seek approval before using human genetic resources (HGR) in their clinical trials, a new regulation is relaxing the definition of ‘foreign entities’ and clarifying when approval is needed. This is intended to make it easier for biotech firms to start clinical trials.

Obtaining approval from the MOST is not always needed as well.

When their clinical trials are for marketing drugs or medical devices in China, companies are not required to apply with the MOST to collect HRG for such trials.

Companies only need to seek approval when the collection of HGR involves important genetic families, resources from certain regions, or large population studies that enroll over 3,000 participants.

In another widely welcomed move, initiating multi-center clinical trials for the purpose of marketing authorization will be simpler.

The new measures are expected to help save biotech companies their time and effort when initiating multi-center clinical trials, as companies often find the current filing process too complex.

However, a separate administrative approval is still required to initiate clinical trials that involve exploratory studies.

The MOST also narrows down what types of HGR will need to be regulated.

This is seen as an improvement as current regulation covers clinical data, imaging data, biomarker data, genetic data, protein data, and metabolic data. The broad scope of the definition adds to the burden of companies looking to initiate international multi-center clinical trials.

Getting a nod from the MOST to collect HGR for clinical trials hasn’t been a smooth journey in China.

Between 2016 and 2020, China saw a threefold increase in HGR applications, according to data revealed by the Office of Human Genetic Resource Administration (OHGRA) at the 2020 DIA China Annual Meeting. OHGRA is under the MOST to regulate HGR.

The agency also revealed how hard it is to obtain approval, as only 50-60% of the applicants pass the pre-review stage. The high approval rates (as seen in the first chart) only reflect those who make it to the actual review stage. Navigating the filing process is also a challenge, as companies have to take multiple steps in order to obtain the administrative approval they need for collecting HGR or using them in studies abroad. 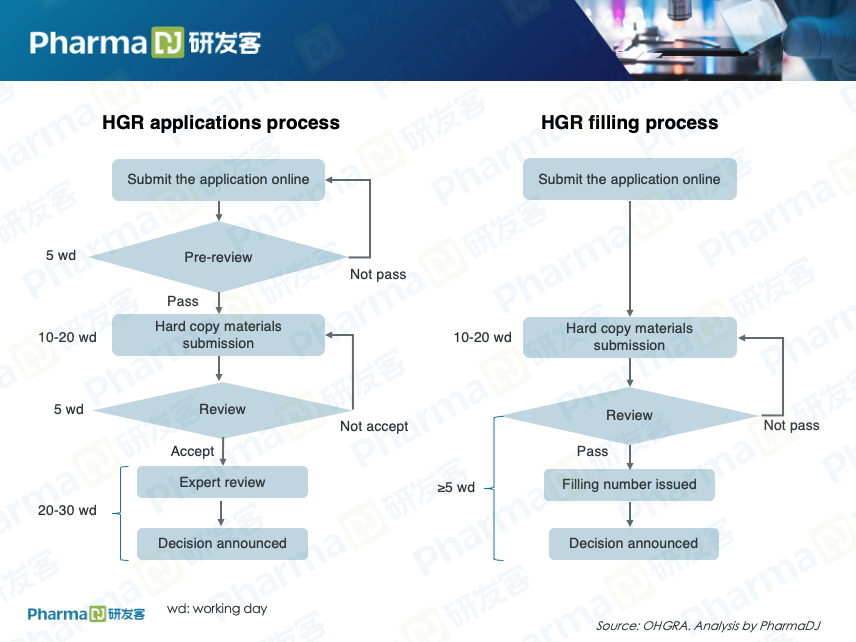 The new regulations are set to help biopharma players, who often experience delays and hefty penalties.

BMS has already gotten a taste of it in China. In late 2020, the pharma giant’s contract research organization in China, ICON Beijing, was found forging documents for an IND filing with the MOST’s Office of Human Genetic Resource Administration. This resulted in the MOST halting HGR applications from BMS and ICON for six months and a year, respectively.

She pointed out that simultaneous drug development across the globe has become an important strategy for drugmakers. The number of international multi-center clinical trials has been on the rise and is likely to continue growing.

“By implementing the new regulation in the future, global simultaneous development of new drugs will be further supported.”