As vaccination rates continue to rise and therapeutic drugs for COVID-19 are coming to the market, vaccine makers are taking a hit, as reflected by their lackluster financing performance in October.

In October, PharmaDJ recorded 26 financing deals for drug developers, 22 of which disclosed their values. After the previous two months’ spike, fundraising retreated back to the levels comparable to figures from beginning of the year.

The 22 disclosed deals reached a total value of roughly $730 million. Two companies, Clover Biopharmaceuticals and Leads Biolabs received at least $100 million to support the development of their candidates. 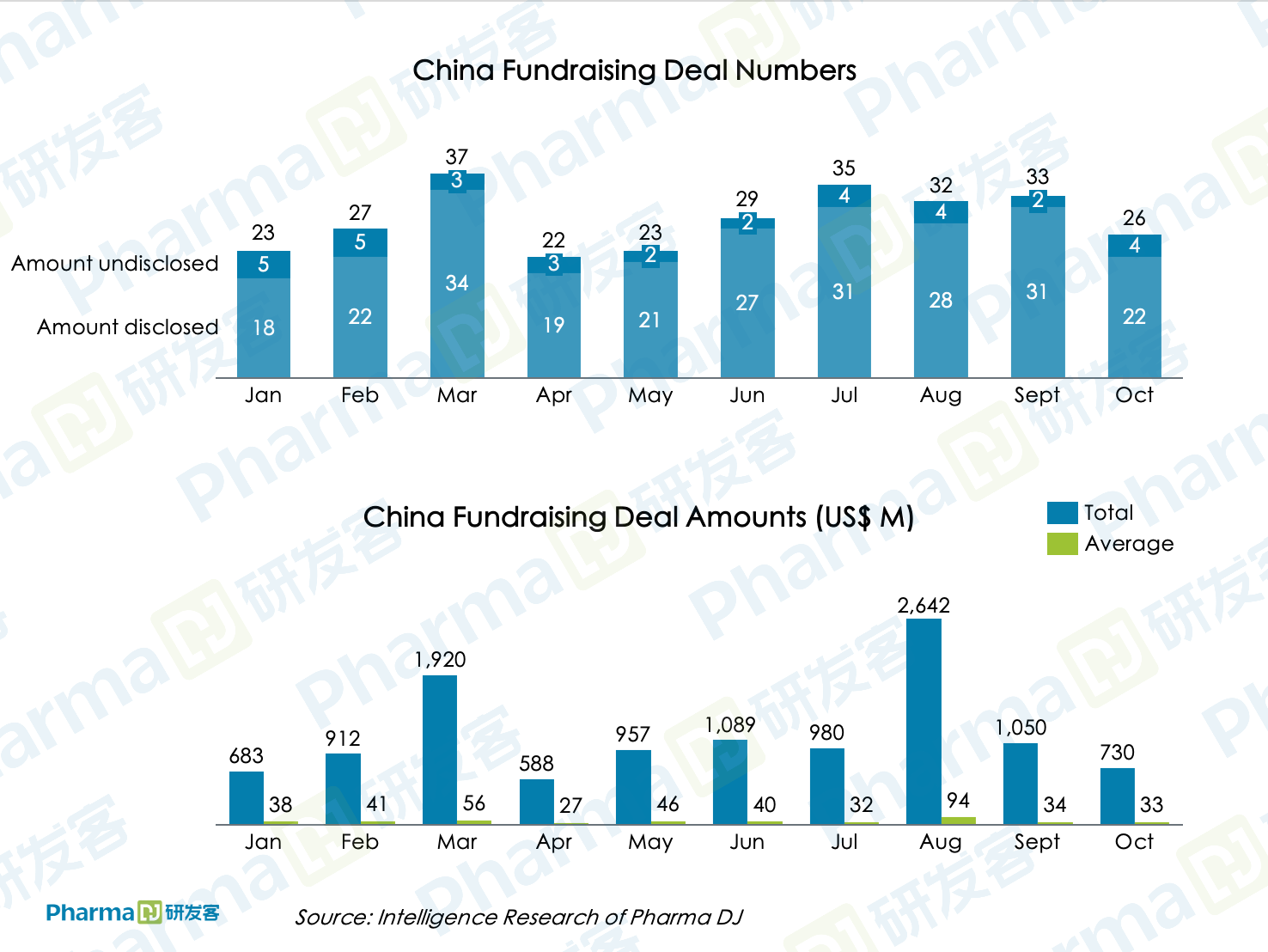 But very often, the presence of prominent cornerstone investors goes hand in hand with bearish market sentiments. Clover had a rather disappointing debut on the Hong Kong Stock Exchange on Nov. 5, as its share price fell 8.7% below the IPO price to close at HK$12.98. The following day, its share price dove nearly 30%.

The disappointing performance of the COVID-19 vaccine maker hardly came as a surprise though.

Since the third quarter of 2021, vaccine stocks have fallen out of favor and lost over RMB100 billion in value, with Cansino Biologics’ share price plunging 60% from its peak on June 24. Cansino’s single-dose viral vector vaccine, Ad5-nCoV, has received emergency use approval since early this year.

A case in point is Cansino, whose revenue fell from RMB1.6 billion in the second quarter to RMB1 billion in the third quarter, and its profits dropped by a half. Zhifei Biological Products, another COVID-19 vaccine developer, also saw its third-quarter revenue dropping 3% and its net profit plunging 36% from the previous quarter.

The success of COVID-19 pills — while great news for many — hit the vaccine developers even worse.

Clover launched its IPO on the same day as the U.K. regulators cleared Merck‘s Lagevrio (molnupiravir), the first oral antiviral for COVID-19. A few days later, Pfizer also announced that its oral antiviral treatment candidate PAXLOVID (ritonavir) was found to reduce the risk of hospitalization or death by 89% in high-risk adults at the interim analysis of a phase II/III study.

The lackluster performance of vaccine developers like Clover in the capital market may affect the financing of other vaccine makers in the future.

Companies racing for a COVID-19 treatment face the same fate. Brii Biosciences, which is developing a neutralizing antibody to treat COVID-19, also saw its share price down near 30% the second week of November.

While market attention mostly went to COVID-19 treatments, a Chinese drugmaker that develops a cure for hepatitis B also made a splash in October.

Huahui Anjian received a whopping RMB500 million in a Series A+ round. Hillhouse Capital led the financing round, while Hankang Capital and MatrixPartners continued their bet on the Beijing-based company.

The startup focuses on developing drugs for treating viral infection and cancer. Its anti-HBV antibody, HH-003, came out from the lab. In 2007, the company’s founder Li Wenhui resigned from Harvard University to return to China’s National Institute of Biological Sciences, where he continued his research on HBV/HDV receptors on hepatocytes.

In 2012, his team successfully identified that a multiple transmembrane bile acids transporter (NTCP, sodiumtaurocholate co-transporting polypeptide), predominantly expressed in the liver, is a functional receptor for HBV and HDV. This discovery earned Li the Blumberg Prize in 2021,

which is the Hepatitis B Foundation's highest honor.

The development of HH-003 is based on this discovery. Currently, HH-003 has completed a phase Ia study, which showed a good safety and pharmacokinetics profile of the drug candidate.

HH-003 targets the pre-S1 (PreS1) domain of the large envelope protein on the surface of the hepatitis B virus. It blocks the binding between virus and NTCP receptors, which prevents viruses from entering the liver cells and abolishes the risk of HBV reinfection.

Preclinical animal pharmacodynamic studies have proved that HH-003 has a clear therapeutic effect on HBV infection. The study showed cccDNA amount dropped in liver tissue. Meanwhile, the HBV DNA copies and the level of HBsAg in serum declined continuously during a period after administration.

Li has also studied coronaviruses for several years. When SARS outbroke in 2003, he and his colleagues were the first in the world to identify ACE2 as a receptor for SARS. When COVID-19 emerged nearly two decades later, Li, again, identified ACE2 as a receptor for the virus. The company is now working on HH-120, a broad-spectrum anti-coronavirus inhalation drug candidate.

Encouraged by the success of Huahui Anjian, biotech companies that have a strong translational medicine background are well positioned to be the next hot investment targets. Hillhouse, Delos and other venture capitalists are now working closely with research institutions.