By Minhua Chu and Long Cheng

Companies tapping emerging technologies, such as mRNA and iPSC (induced pluripotent stem cell), were the biggest fundraisers in July.

PharmaDJ recorded 35 transactions in July with $980 million raised in 32 of them, compared to 29 deals the month before. The COVID-19 pandemic has accelerated the development of mRNA techology and intensified interest in the new technology, as it shows promise not only in treating infectious diseases but also cancer. Not only have more mRNA startups begun sprouting up in China, but more pharma players are also keen to explore and invest in the technology.

One of them is Junshi Biosciences, which is known for winning the first approval for a homegrown PD-1 antibody. On July 19, it made the biggest deal of the month, committing up to RMB799 million ($123 million) to a joint venture with Hangzhou-based startup Immorna to develop mRNA drugs and vaccines for oncology, infectious diseases and rare diseases.

Junshi will make an initial investment of RMB200 million, of which RMB50 million will be used to subscribe to 50% of the registered capital of the joint venture. Last year, Junshi also invested $1.4 million in Stemirna Therapeutics, which develops mRNA vaccine therapeutics for cancer.

Immorna was founded in 2019 to develop self-replicating and conventional mRNA-based therapeutics and vaccines. The startup raised over RMB100 million from a Series A round in February 2021.

Just one week before the deal with Junshi, Immorna said it will partner with I-Mab Biopharma to develop mRNA-based drugs expressing anti-tumor antibodies in vivo.

Vaccine and drug developer Innorna said in July that it closed a Series A round to raise serveral hundred million RMB in the first quarter of this year. Last year, the startup also received RMB35 million from vaccine maker Zhifei Biological Products.

Proxybio, a biotech leveraging its own mRNA high-throughput synthesis platform and delivery technology, also closed a seed funding of more than RMB10 million.

Founders of both companies were trained under MIT professor Robert Langer, who is regarded as a towering figure in the mRNA space.

Shanghai CellOrigin, a company specializing in iPSC-derived innate immune cell therapies, also raised tens of millions of RMB in an angel round. The company is developing therapies to tackle neurodegenerative diseases, cancers and rare diseases. It is expected to submit an IND filing for its lead candidate UniXell DA001 for Parkinson’s diseases. 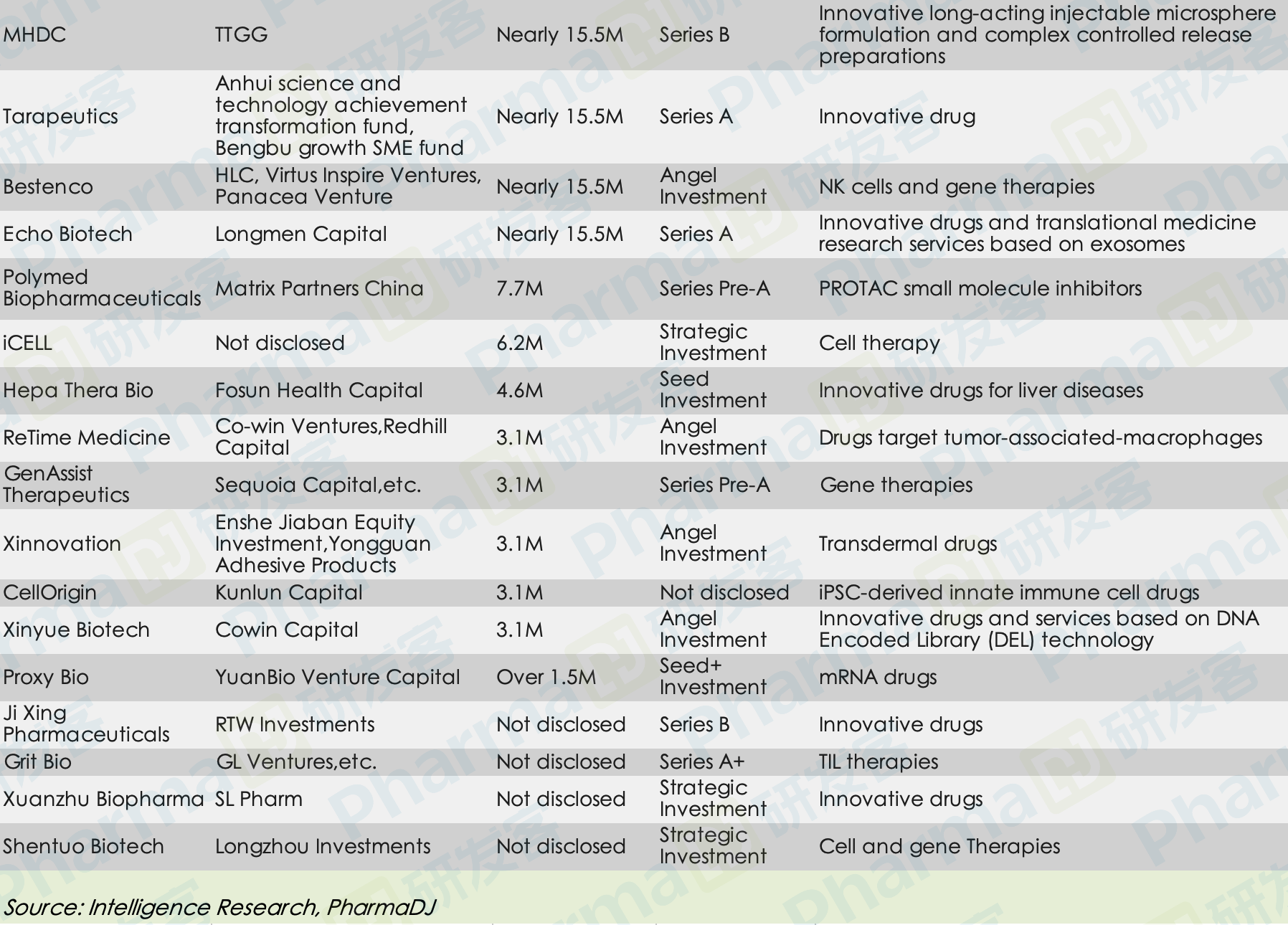