Chinese biotech firms were eager to show off the results of their work in a variety of therapeutic areas at this year’s edition of the American Society of Clinical Oncology (ASCO) meeting.

Companies such as Henlius, OriCell, CStone, Gracell and Junshi presented clinical data from their PD-(L)1, cell therapy and other candidates.

Serplulimab in combination with chemotherapy was found to significantly extend the median overall survival (OS) to 15.4 months versus 10.9 months in the control group in first-line SCLC.

The company said its ASTRUM-005 study screened subjects across 114 sites in six countries, with 31.5% of patients being Caucasian. 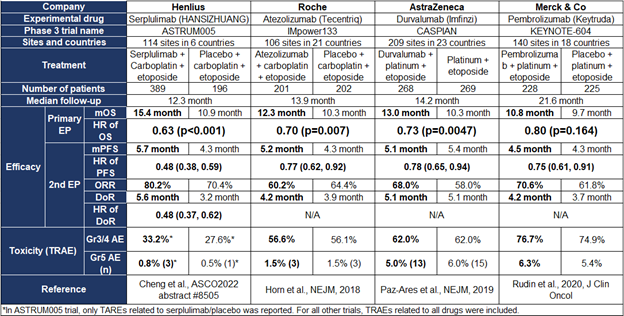 Grade 3 and above treatment related adverse events (TRAEs) related to serplulimab/placebo occurred in 33.2% in serplulimab/chemo arm versus 27.6% in chemo control arm.

Henlius has submitted the data package for for ES-SCLC to China’s NMPA and plans to submit to the EMA in the second half of 2022. Serplulimab received orphan drug designation from the FDA in April 2022.

As of November 10, 2021, 80 patients were enrolled in the single-arm GEMSTONE-201 study and received sugemalimab monotherapy.

Based on the evaluation by the IRRC, durable objective response was observed in patients who responded to sugemalimab. Median DOR was not reached at the time of the analysis. The 6-month and 12-month DOR rates were 90.8% and 86.0%, respectively

Sugemalimab has been granted breakthrough therapy designation by the FDA for adults with R/R ENKTL.

At the ASCO meeting, Junshi Biosciences chose to highlight its anti-BTLA monoclonal antibody, icatolimab, in addition to its PD-1 inhibitor toripalimab. It said icatolimab is the first BTLA-targeted drug against tumors in clinical trials.

In a phase I study evaluating icatolimab as a single agent or in combination with toripalimab in 31 patients with R/R lymphoma, no dose limiting toxicity (DLT) was observed in either monotherapy or combination dose escalation as of April 26 2022 (median follow-up 31.9 weeks).

In another phase Ia trial of icatolimab in patients with advanced solid tumors, no DLTs were observed as of April 31, 2022 (median follow-up 32 weeks). Among 19 evaluable patients, one PR and seven SD were observed as assessed by the investigator per RECIST v1.1 criteria.

Icatolimab has now entered the phase Ib/II dose expansion phase. Junshi is conducting a combination trial of icatolimab and toripalimab in multiple tumor types in China and the U.S.

OriCell Therapeutics drew attention this year with its Ori-CAR017, an autologous GPRC5D-directed CAR-T cell in adults with measurable multiple myeloma (MM), R/R or intolerant to established MM therapies and relapsed after BCMA-targeted therapy.

In the phase I POLARIS study, single infusion of Ori-CAR017 demonstrated an early, deep and durable responses at all dose levels in heavily pretreated R/R MM patients, including those who relapsed from BCMA CAR-T therapy.

OriCell said ORR was 100% with CR/ stringent CR (sCR) rate of 60%, including five patients with prior BCMA CART therapy achieving two sCR, two very good PR and one PR. All patients were noted as progression free without additional therapy at data cutoff.

It added that no DLTs or serious adverse events were observed. There was no immune effector cell associated neurotoxicity syndrome either, but only grade 1/2 cytokine release syndrome. Most common grade 3/4 adverse events were cytopenia mainly due to lymphodepleting chemotherapy.

OriCell said it will focus on filling an IND with the NMPA and FDA for Ori-CAR017.

The safety profile of GC012F was consistent with previous findings with mostly low grade of cytokine release syndrome (CRS) (Grade 0-2 (93%)). No Grade 4 or 5 CRS, or any Grade immune effector cell-associated neurotoxicity syndrome (ICANS) were observed.

In November 2021, GC012F was granted orphan drug designation for MM by the FDA. GC012F is now in investigator-initiated trials in China for MM and B-NHL.

The annual gala was also attended by plenty of other Chinese biotech firms, such as Ascentage Pharma, Alphamab, Innovent Biologics, RemeGen and BeiGene.

Ascentage presented results from a phase Ib/II study of the third-generation tyrosine kinase inhibitor olverembatinib in patients with metastatic gastrointestinal stromal tumor (GIST) who were resistant to or failed prior TKI treatment. It also updated phase II data of MDM2-p53 inhibitor alrizomadlin plus pembrolizumab in adults and children with various solid tumors.

Alphamab provided updated data of its PD-L1/CTLA-4 bispecific antibody, KN046. The candidate is in a number of studies.

RemeGen provided data of its HER2-targeted ADC disitamab vedotin, which it licensed to Seagen in a $2.6 billion deal in 2021. The data came from three studies centered on urothelial carcinoma.

Last but not least is BeiGene. It presented data of its BTK inhibitor zanubrutinib in Waldenström macroglobulinemia and R/R follicular lymphoma. The company also shared results of its PD-1 drug tislelizumab as first-line treatment for recurrent/metastatic nasopharyngeal cancer.

NK CellTech closes Series A to raise over $15...