The biotech deal making space in May 2022 saw Chinese drugmakers licensing out their assets – both innovative drugs and biosimilars – for as much as a billion dollars. Partnerships with foreign drugmakers have become a lucrative source of funding.

In May, Merck Sharp and Dohme (MSD) and Turning Point Therapeutics gained China-originated cancer drugs in deals worth $2.63 billion, accounting for 82.6% of the total deal value of the month. 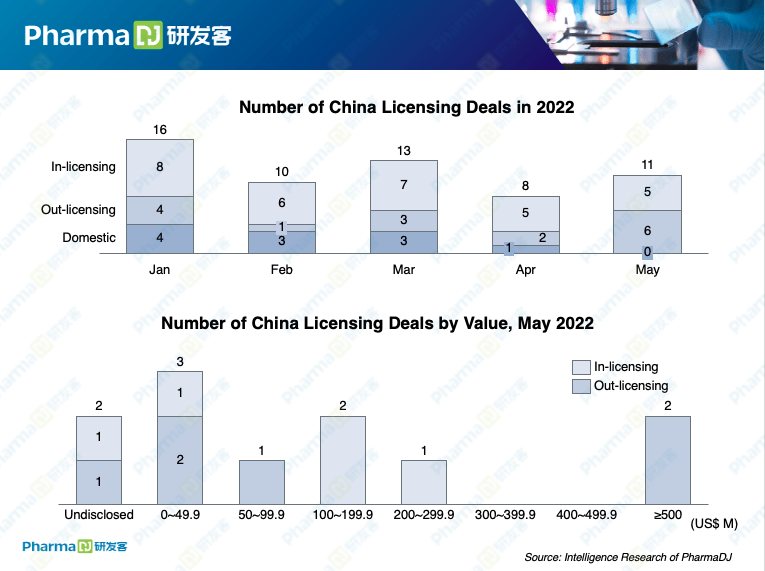 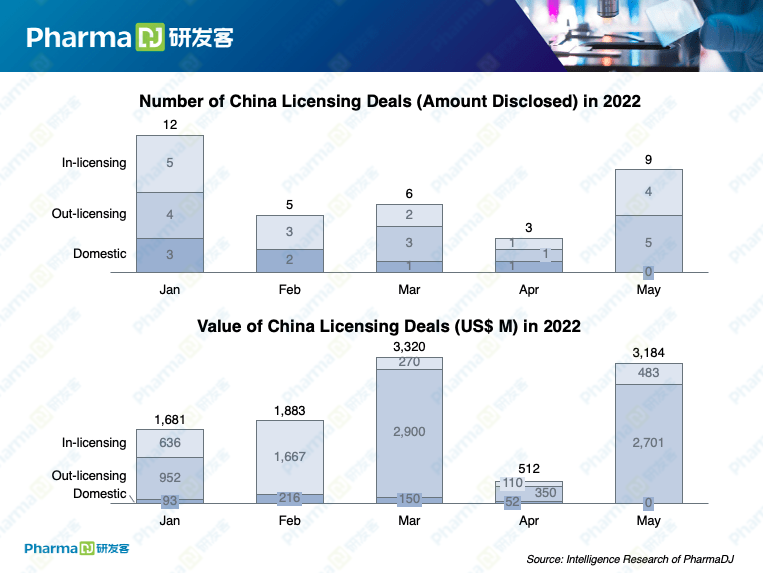 On May 5, Turning Point Therapeutics paid Shanghai’s LaNova Medicines $25 million in upfront payments to license global rights to its Claudin18.2-targeted antibody drug conjugate (ADC), LM-302, outside of greater China and South Korea. There will also be $195 million in development milestone payments plus commercial milestone payments up to $1 billion and tiered royalties ranging from the mid-single digit to mid-teens.

Turning Point is a clinical-stage precision oncology company and was acquired by Bristol Myers Squibb on June 3. The deal with LaNova will enrich its product pipeline.

As for LaNova, this deal will help strengthen its cash flow. The startup last raised an undisclosed amount in funds in January 2021. It has advanced four products to the clinical stage and will need more funding to support its R&D. LM-302 is currently being studied in a phase II trial for advanced solid tumors.

Claudin 18.2 is highly expressed in patients with gastric cancer. According to data compiled by PharmaDJ, at least eight companies – most of them from China – are developing Claudin 18.2-targeted ADCs and three of them are in phase II studies, including LM-302, RemeGen’s RC118 and SOTIO’s SOT102.

A week later, MSD also reached out to Sichuan Kelun Pharmaceutical for a billion-dollar deal. On May 16, Kelun’s U.S. subsidiary Klus Pharma licensed the overseas development rights of a large molecule drug candidate to MSD in a deal worth over $1.4 billion. While the asset was not disclosed, industry insiders expect it to be a TROP2-targeting ADC SKB264, or HER2-targeting ADC A166.

Biosimilar made in China have found their way to bigger markets.

On May 24, Shanghai biotech firm Henlius inked a deal with Abbott. It received $3 million upfront payment and not more than $1.4 million in milestone payments from Abbott to out license semi-inclusive right in Brazil for Hanlikang (rituximab) and Hanquyou (trastuzumab)..

But this was not the only out-licensing deal for Henlius that month. On May 11, it entered a $50.5 million deal with Eurofarma Laboratórios. The Brazilian company will have the inclusive option to develop and commercialize three biosimilar products including Hanlikang (rituximab), Hanquyou (trastuzumab), and Hanbeitai (bevacizumab) in 16 Latin American countries.

On June 13, 2022, another US company Organon acquired commercialization rights from Henlius for HLX11 (pertuzumab biosimilar) and HLX14 (denosumab biosimilar) in a deal worth $538 million.

In recent years, Chinese drugmakers have successfully taken their biosimilar products overseas, especially to emerging markets. Since 2021, there were eight biosimilar out-licensing deals in China, mainly by Henlius and Bio-Thera.

“Biosimilar makers are looking to overseas markets due to the large number of homegrown biosimilar developers and limited market expansion in China”, said Chu. “There is also pressure from price negotiations for the national reimbursement and the volume-procurement program.”