2021 wraps up with multi-billion dollar deals

The end of 2021 saw a spike in licensing deals for innvoative drugs in China. In November and December 16 and 21 licensing deals were reached, respectively. December boasted the second highest number of deals for the year, including 18 in-licensing deals from overseas, seven out-licensed deals and 12 deals between Chinese pharmaceutical firms. Deals in December reached a total value of $7.205 billion — the highest of the year — with four large deals amounting to $500 million. Two of these four were out-licensing deals valued at more than $1 billion.

BeiGene will hand over development and commercialization rights to ociperlimab, a late-stage TIGIT inhibitor, in the U.S., Canada, Mexico, the European Union, the U.K., Norway, Iceland, Liechtenstein, Switzerland, Russia and Japan to Novartis. BeiGene will receive an upfront cash payment of $300 million from Novartis along with an additional payment of $600 or $700 million if options are exercised. The company will be eligible to receive up to $745 million in regulatory milestones, $1.15 billion in sales milestones, and royalties on future sales of ociperlimab in the licensed territories.

Shanghai-based Regor Therapeutics Group, a biotech startup spun off from Qilu Pharmaceutical, inked a deal to the tune of $1 billion with pharma giant Eli Lilly. The two firms have formed a multi-year research collaboration and licensing agreement to discover, develop and commercialize novel therapies for metabolic disorders.  To gain the ex-Greater China rights of Roger's compounds, Lilly will pay $50 million upfront with an equity investment, $1.5 billion in potential milestone payments, and tiered royalties from low-single to low-double digits on resulting sales. BeiGene was one of the busies buyers in December. It also purchased the global rights to lBL-007, a novel antibody targeting LAG-3 from Leads Biolabs, a clinical stage biotech firm based in Nanjing, for up to $742 million.

Anti-tumor treatments continue to be the hottest targets for deals as evidenced by the 15 such deals reached in November and December. The three largest deals were all related to anti-tumor therapies totaled at $5.219 billion. Endocrine and metabolism treatments are gaining traction in the market as well. In addition to the previously mentioned partnership between Regor and Eli Lilly, Chinese pediatric drug specialist Jumpcan Pharmaceutical Group acquired the rights to a highly differentiated long-acting recombinant human growth hormone called eftansomatropin alfa (TJ101) from innovative drug developer I-Mab for up to $316 million. These two deals bring the total deal value in this field to $1.86 billion, making it the second largest therapeutic field in terms of deal value in the past two months.

In November, Zenas BioPharma, a U.S.- and China-based firm that develops immune-based therapies, said it has acquired from Xencor exclusive worldwide rights to develop, manufacture and commercialize the investigational phase II-ready, novel bifunctional antibody obexelimab. Zenas will pay up to $480 million for clinical development, regulatory and commercialization milestones, plus tiered, mid-single-digit to mid-teen percent royalties.

As the only deal in this field, rheumatology took third place in terms of deal value in November and December.

A preference for late-stage oversea assets,  but early projects are getting attention too

However, out-licensing and domestic deals were skewed more toward early-stage projects. Four out-licensed projects (58%) were still in drug discovery and pre-clinical stages. The deals between Chinese companies were primarily in preclinical and phase I stages, accounting for 38% and 23%, respectively. 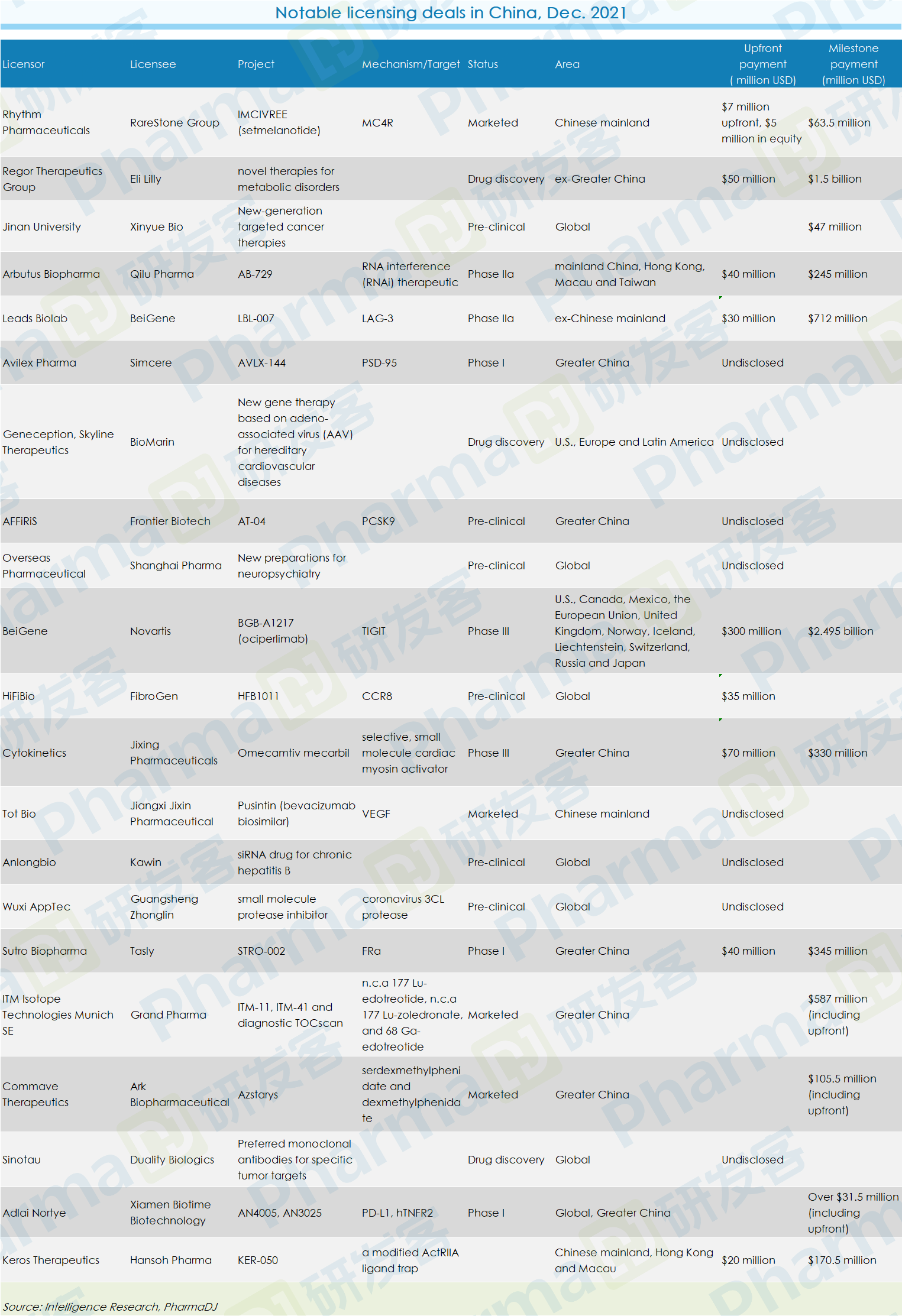