The final month of 2021 was the most active month for Chinese biotech startups with a total of 39 financing rounds. A total of 38 deals worth up to $1,682 million were made public, the third highest amount disclosed in the past year. Four companies obtained more than $100 million. Anshi Biotechnology, a Beijing-based company that develops targeted oncology drugs, has received series A funding of over $200 million led by Vivo Capital, making it the highest funding round of the month. 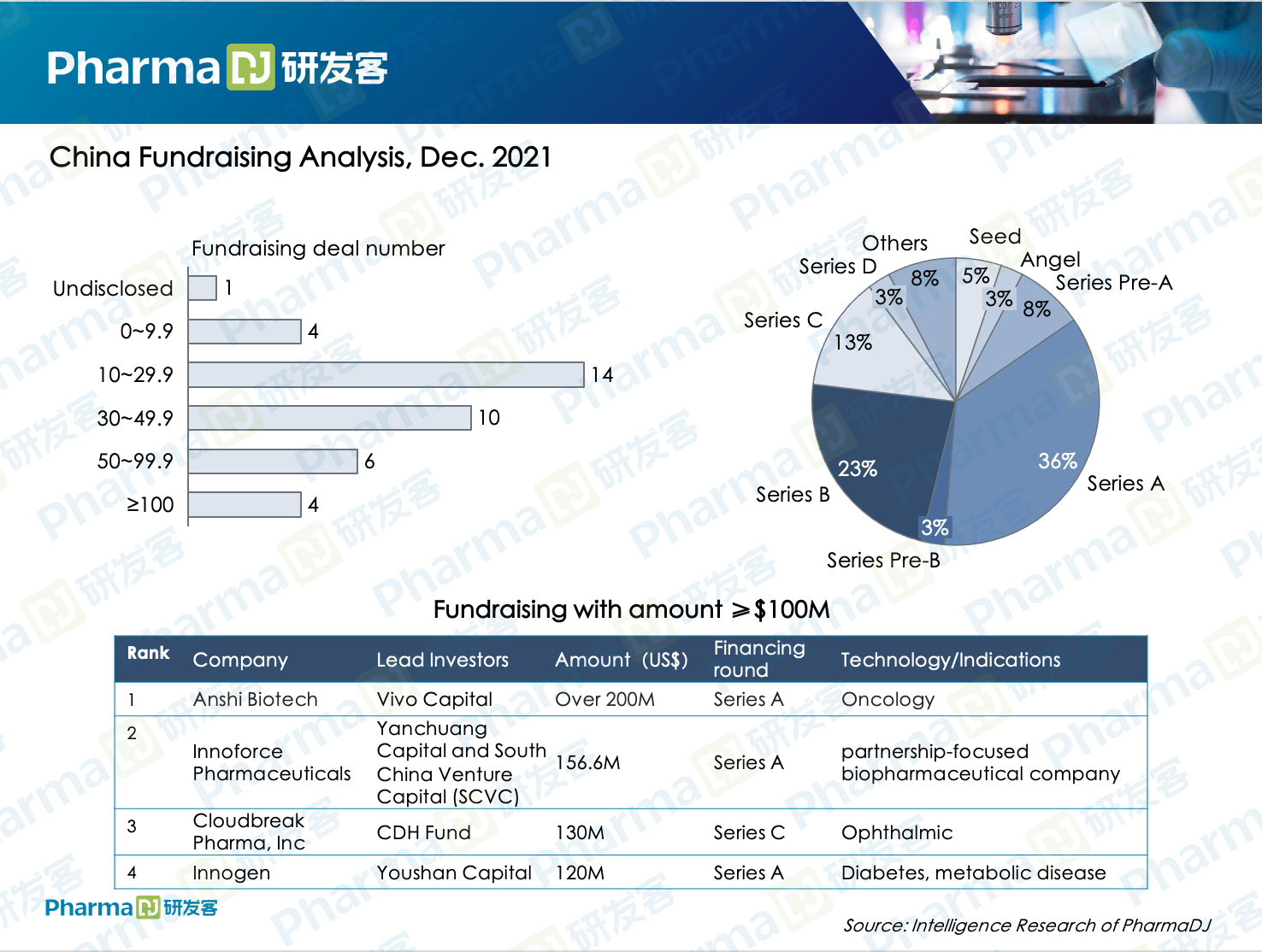 Several big series A financing in December warrant attention, as they speak of a wider trend for drug innovation in China.

Innogen was established in 2015 to develop drugs for diabetes and metabolic disorders. Innogen's leading product is suparglutide, a long-acting GLP-1 agonist for type 2 diabetes. According to website chinadrugtrials.org, this drug candidate is currently undergoing two phase III studies. The dosing schedule is once per week in the trial.

Innogen's founder, Qinghua Wang, has conducted research in diabetic metabolic diseases for several decades. ,KPC Pharmaceuticals was an early-stage investor and took a 51% stake in Innogen. But last year, KPC Pharmaceuticals announced that it would exit from the company and has since sold all of its shares.

Other major competitors in China's diabetes drug market, such as Gan&Lee Pharmaceuticals, Huadong Medicine and Tonghua Dongbao Pharmaceutical, are all participating in the development of the long-acting GLP-1 agonist.

After several years, suparglutide is nearing completion of its phase III trial and faces a highly competitive market and VBP. It would therefore make sense for KPC Pharmaceuticals to pull its investment.

But its early-stage pipelines, such as A-319 and A-337 have been spun off into ITabMed. Evive takes a 20% stake in the new company and has priority rights to ITabMed ’s product commercialization.

A-319 and A-337 have already entered phase I clinical trials, which are both generated by Generon’s (now ITabMed ’s) iTAb platform. This platform applies the T-cell engager (TCE) mechanism to generate T cell-activating bi- or tri-specific iTAb antibodies. A-319 is a CD19/CD3 bi-specific antibody developed to treat patients with several kinds of blood tumors. A-337 is an EpCAM/CD3 bi-specific antibody developed for solid tumors.

According to Evive, this spin-off will shift the company's focus on late-stage product development.

These developments indicate that large domestic pharmaceutical companies are evaluating the benefits and risks of holding innovation assets. In recent years, the profitability of generic drug companies has declined, which may also influence their investment in innovative drugs.

On December 21, 2021, NeoCura announced that it completed an RMB 500 Million ($78 million) A+ round of financing to accelerate pipelines entry to clinical trials.

Tumor neoantigen vaccines can trigger the immune response of the body to tumor-specific mutants. NeoCura’s platform combines mRNA technology with AI, which may significantly promote the precision of neoantigen design, reduce costs, and shorten the preparation time.

NeoCura and Innovent have entered into a strategic collaboration agreement to carry out a clinical study in China Innovent's combination therapy of sintilimab and NeoCura's individualized neoantigen vaccine NEO_PLIN2101.

Circode Biomed, another RNA company, was founded Zefeng Wang, who first discovered that circRNAs can be translated to functional proteins in the body in 2014. The company’s CTO Yun Yang also has broad experience in RNA technology.

Circode raised over $20 million from this series pre-A round of fundraising to improve its circRNA technology platform, advance its pipeline and build an R&D center in Shanghai. This was only half a year after its nearly $10 million in angel financing.

Circode has submitted a patent application for cirRNA translation technology, and only a few companies in the world currently possess cirRNA-related technology.