There were only 10 drug deals in China in February 2022, much less than the 16 deals recorded in the month before. The Chinese New Year holidays likely had an impact on how quiet the month was.

However, there were still some notable deals. Huadong Medicine announced a series of three in-licensing deals with a combined value of $1.667 billion, pushing the total deal value for the month to $1.883 billion, edging over the $1.681 billion in January 2022. Five of the 10 deals were for oncology drugs. Autoimmune and anti-infection drugs were the key assets that Chinese companies have their eye on.

SciNeuro Pharmaceuticals and Zhongze Therapeutics both in-licensed early-stage programs for neurological diseases, although neither shared the value of their deals. 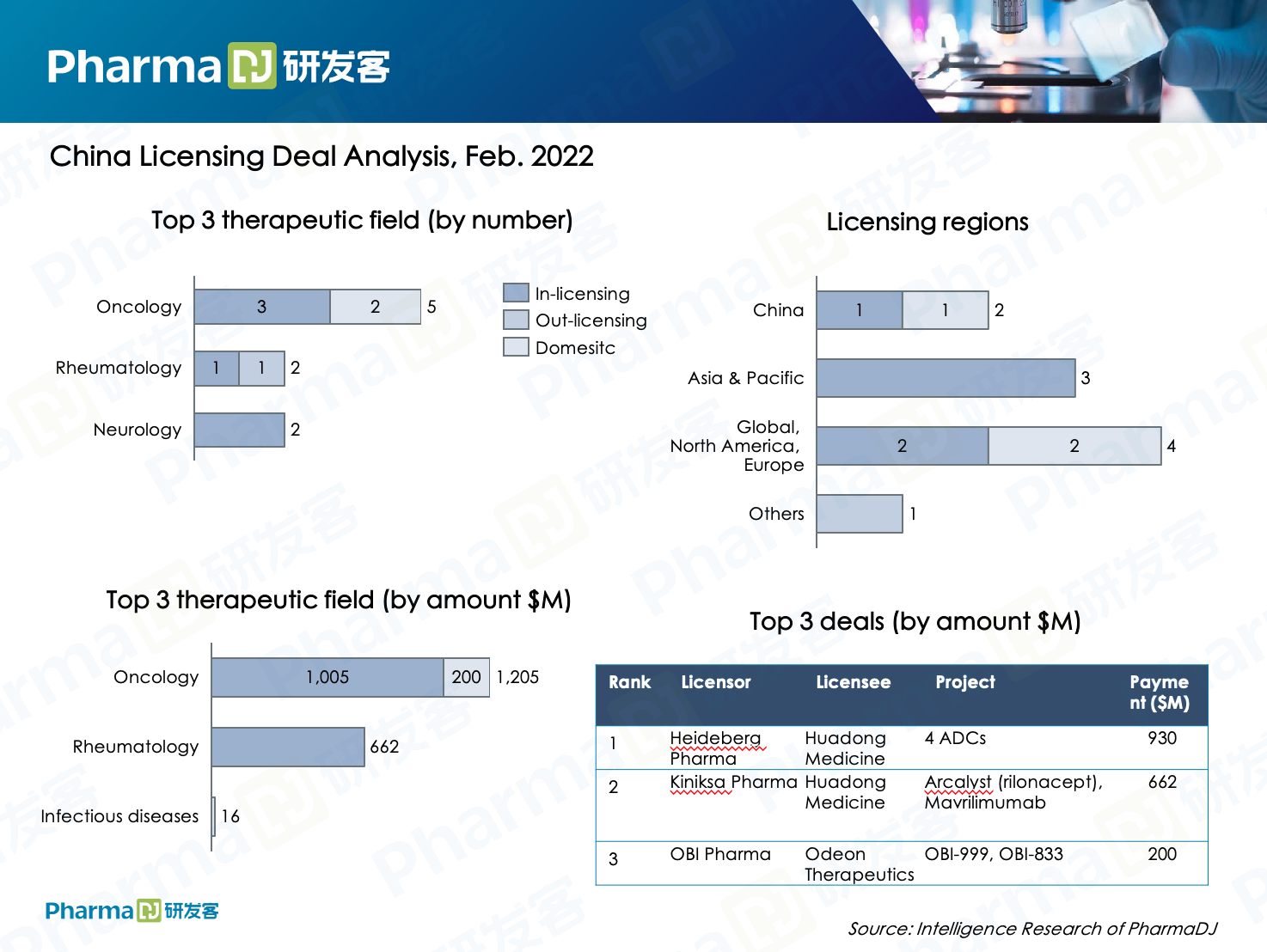 Huadong Medicine’s trio of in-licensing deals in February signalled that it is on the lookout for innovative candidates.

On February 22, Huadong won exclusive rights for two of Kiniksa Pharmaceuticals’ autoimmune products, Arcalyst (rilonacept) and mavrilimumab, in the Asia Pacific region (including China, South Korea, Australia and 18 other countries, excluding Japan). Kiniksa will receive an initial payment of $22 million, up to $640 million in clinical development, registration and sales milestone payments, and tiered sales commission fees.

Five days later, Huadong shared a $930 million in-licensing agreement to introduce ex-Japan Asian interests for four ADCs from German biopharmaceutical company Heidelberg Pharma. The targets of three of the candidates are for BCMA, CD37 and PSMA.

In the same month, Huadong had committed to pay up to $75 million to acquire exclusive clinical development and commercialization rights of AB002 in the Asia-Pacific region (excluding Japan) from U.S.-based AKSO Bio. AB002 is a dual-target bi-specific fusion protein targeting PD-L1/L2 and IL15 in the treatment of solid tumor. The drug now is in preclinical development.

Huadong is one of the most active buyers in China, demonstrating its ambition to transition from traditional pharmaceutical companies into innovative drugs developer through a myriad of deals. Oncology and nephrology are two of its key therapeutic focuses.

In addition, Huadong has established a partnership with Insilico Medicine, a company with AI drug discovery platform, to co-develop small molecular tumor drugs.