Chinese biotech companies are showing more interest in therapeutic areas other than just oncology, based on licensing deals in April 2022. 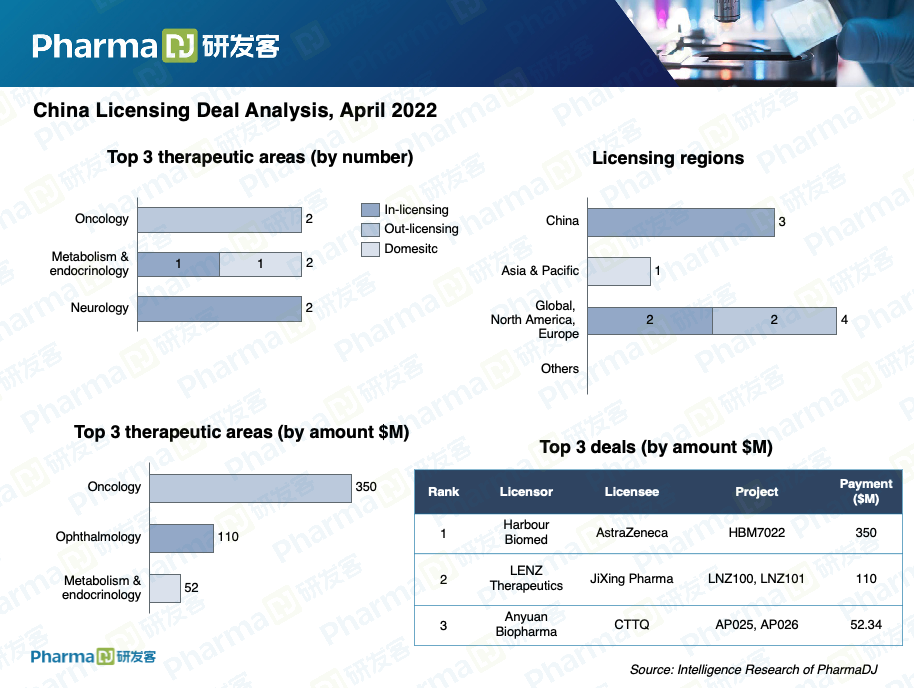 It is also worth noting that Chinese drug developers are still actively expanding into the U.S. and Europe markets with two out-licensing deals inked in the month.

Shenzhen Pregene Biopharma, a clincial-stage cell therapy company, granted CellPoint the exclusive development and commercialization right for PRG-1801 in Europe and the U.S. The candidate is a single domain antibody-based anti-BCMA CAR-T program for the treatment of hematological indications.

Overall, eight licensing deals were announced in April, with three of them disclosing the deal amounts. In terms of the disclosed deal amounts, there was a significant pullback compared to the first quarter. Founded in 2019, JiXing focuses on developing innovative cardiovascular and ophthalmic drugs. The two candidates introduced from LENZ of the month, LNZ100 (acetocritidine) and LNZ101 (acetocritidine + brimonidine), are key projects for the originator company. They are aimed at restoring near vision loss associated with presbyopia, and are being planned for Phase III studies.

In China, there are only a few players specializing in ophthalmic drugs. Most of them are multinational pharma companies, such as Santen, Allergan and Bausch & Lomb. Their products make up about 60% of the market share. Due to the high technical barriers of ophthalmic products, Chinese players tend to rely on acquiring new ophthalmic drugs from abroad.

There are two other ophthalmic candidates in JiXing's pipeline, OC-01 (varenicline) and OC-02 (simpinicline) for dry eye disease. These are also in-licensed and were acquired from Oyster Point Pharma for $222.3 million in August 2021.

Other ophthalmic specialists in China include Ocumension Therapeutics, LiantBio, Arctic Vision and AffaMed Therapeutics. They stay active in R&D through in-licensing deals.

From March 2021 to April 2022, there have been seven deals in ophthalmology. Ophthalmic drugs have become an important target of in-licensing deals in China.