Chinese regulators have shared their considerations on selecting drugs for inclusion in state medical insurance, which should give drugmakers food for thought in terms of their strategy.

On June 13, the National Healthcare Security Administration (NHSA) released documents that further specify its rules on the National Reimbursement Drugs List (NRDL). As it is the agency that pays for China's public health care security system, industry stakeholders see it as a sign that a new round of negotiations between the NHSA and drugmakers is about to start.

The NRDL determines what drugs will be reimbursed by China’s health care system. In other words, it’s the one that decides the fate of companies and their drug sales in China for the coming year.

In a sample presentation, the NHSA clarified what it looks out for when evaluating what drugs to place on the NRDL. The agency will look at five factors, namely safety, efficacy, economic value, innovativeness and fairness.

Drugmakers will need to keep these in mind when preparing for their price negotiations with the NHSA. Otherwise, they risk having their applications rejected. 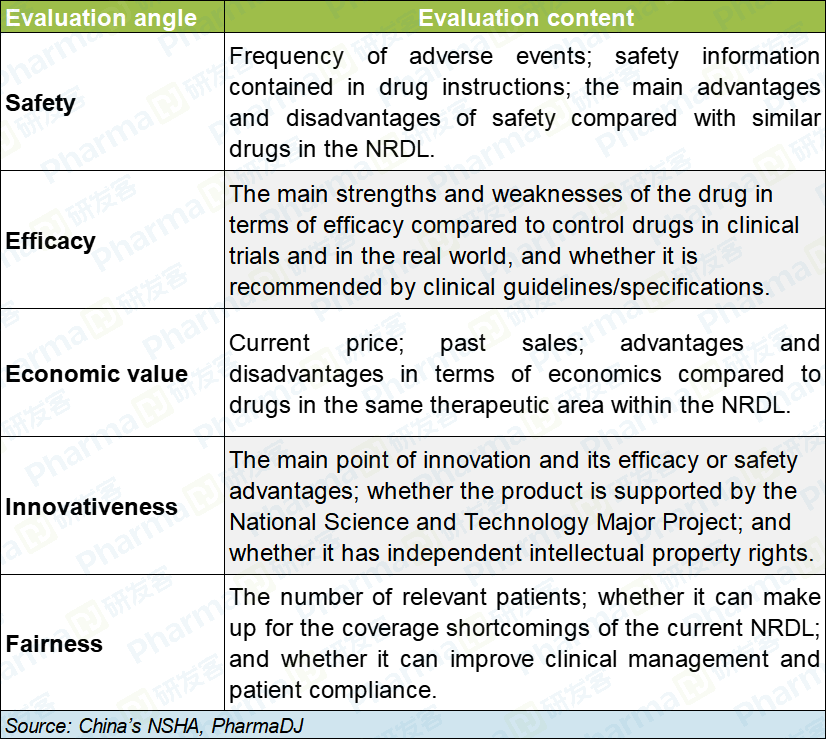 Drugmakers need to demonstrate the innovativeness of their drugs and their efficacy or safety advantages at the presentation. If it’s supported by the National Science and Technology Major Project or has independent intellectual property rights, it may get a higher score.

In terms of economic value, drugmakers should provide current prices of their products in each province and sales in mainland China for the past two and a half years. This is particularly important for the NHSA to determine the price cap.

For effectiveness, companies are required to provide the main advantages and shortcomings of the drug compared to the control drugs in clinical trials and in the real world, plus a description of the effectiveness issued by the CDE. Recommended by clinical guidelines/specifications would also be helpful.

This is the fifth time that the NHSA has restructured the process for NRDL consideration. The whole process is divided into five stages: pre-preparation, company declaration, expert evaluation, on-site negotiation and the announcement of the results. Based on the current progress, the updated NRDL is expected to be announced in November 2022.

Generally, drugs entering the NRDL must be negotiated. Over the past few years, many drugs have seen steep price cuts for NRDL inclusion after negotiations with the NHSA.

For example, Biogen's Spinraza (nusinersen sodium injection) for spinal muscular atrophy (SMA) was negotiated down to the eventual Medicare payment price of ¥33,000 last year. This is a 95% reduction compared to the drug's initial price of nearly ¥700,000 when it was launched in China in 2019.

The cheaper the better

For the first time, the NHSA has introduced bidding rules for non-exclusive drugs – those with the same generic name by multiple manufacturers. The lowest bid will set the price for the state medical insurance scheme.

Experts from the NHSA will determine the price cap of a drug that it intends to include in the NRDL confidentially. Once this cap is set, companies suggesting a higher price will fail to secure inclusion for their products.

Companies must ensure that when supplying the drug to medical institutions under the national medical insurance system, the price they offer cannot exceed the one quoted in the bidding process.

These new bidding rules are set to further test drugmakers’ ability to come up with a bid acceptable to both sides. Drugmakers that sell their products at a high price are expected to be hit by the new low price set in the national medical insurance scheme.

New drugs (drugs with new generic names) approved for marketing in China from 2017 to June 30, 2022, drugs included in the COVID-19 Diagnosis and Treatment Program/ National Essential Drug List/ List of Paediatric Drugs Encouraged for Research and Development, and for the treatment of rare diseases can apply for entry into the NRDL, stated the NHSA.

To include new drugs in the NRDL faster, drugs approved before June 30 are eligible for price negotiation for next year’s list. The NHSA also pledged continuous support for innovative, orphan and pediatric drugs, as well as COVID-19 treatments.

A total of more than 100 new drugs may be subject to the negotiations this year. Preparations for these talks are already underway, such as AbbVie's acute myeloid leukemia treatment Venclexta (Venetoclax Tablets), Roche's SMA oral drug Evrysdi (Risdiplam Powder for Oral Solution) and the HER2-positive breast cancer treatment Kadcyla (Trastuzumab Emtansine for Injection).

The makers of these three drugs have taken the initiative to lower their prices recently, according to the data by People's Daily Health Client. It seems that they are cutting prices in advance to gain a head start in the new round of medical insurance negotiations.

PD-1 inhibitors have always taken a center stage in price negotiations, as they are the most sought after products by Chinese drugmakers and usually see the biggest price cuts.

Since June 30, 2021, a number of domestic PD-1 drugs have been approved for new indications. Approximately 15 new indications could be added to the list in 2022 if talks go well. Esophageal cancer, non-small-cell lung carcinoma and nasopharyngeal cancer are expected to be the focus.

Among them, Innovent Biologics' Tyvyt (sintilimab injection) was approved as a first-line treatment of esophageal squamous cancer in June 2022, just in time to be eligible for the NRDL negotiations.