March 2021 saw 16 licensing deals for innovative drugs in China. Once again, in-licensing continues to account for the majority of the deals with a total of 10 transactions. Eight of them were were publicly disclosed with a total value of $896.6 million, a figure slightly lower than that of February. The largest deal of the month was a contract between Korean firm Daewoong Pharmaceutical and Shanghai Haini Pharmaceutical, a subsidiary of the Yangtze River Pharmaceutical Group (YRPG), to license out fexuprazan to China. The $338 million contract includes an upfront payment of $18 million plus $12 million milestones.

Fexuprazan is a new P-CAB (potassium-competitive acid blocker) drug for the treatment of gastro esophageal reflux. The drug has already been approved by the NMPA to enter phase III clinical trials. According to Korea Biomedical Review, Daewoong plans to proceed with phase I trials on approximately 30 people in the first half of this year and then complete phase III clinical trials by 2022.

Founded in 1971, YRPG is a private company and has topped the “China Pharmaceutical Industry Top 100” six years in a row since 2014. According to the audit report YRPG submitted to the State Administration for Market Regulation (SAMR), its annual revenue reached RMB25.467 billion ($3.93 billion) in 2018.

This is the second time in six months that YRPG has introduced overseas assets through its subsidiary Shanghai Haini. In December 2020, the company also signed an exclusive licensing agreement with Allecra Therapeutics to acquire the manufacturing, development and commercialization rights to cefepime-enmetazobactam in Greater China. 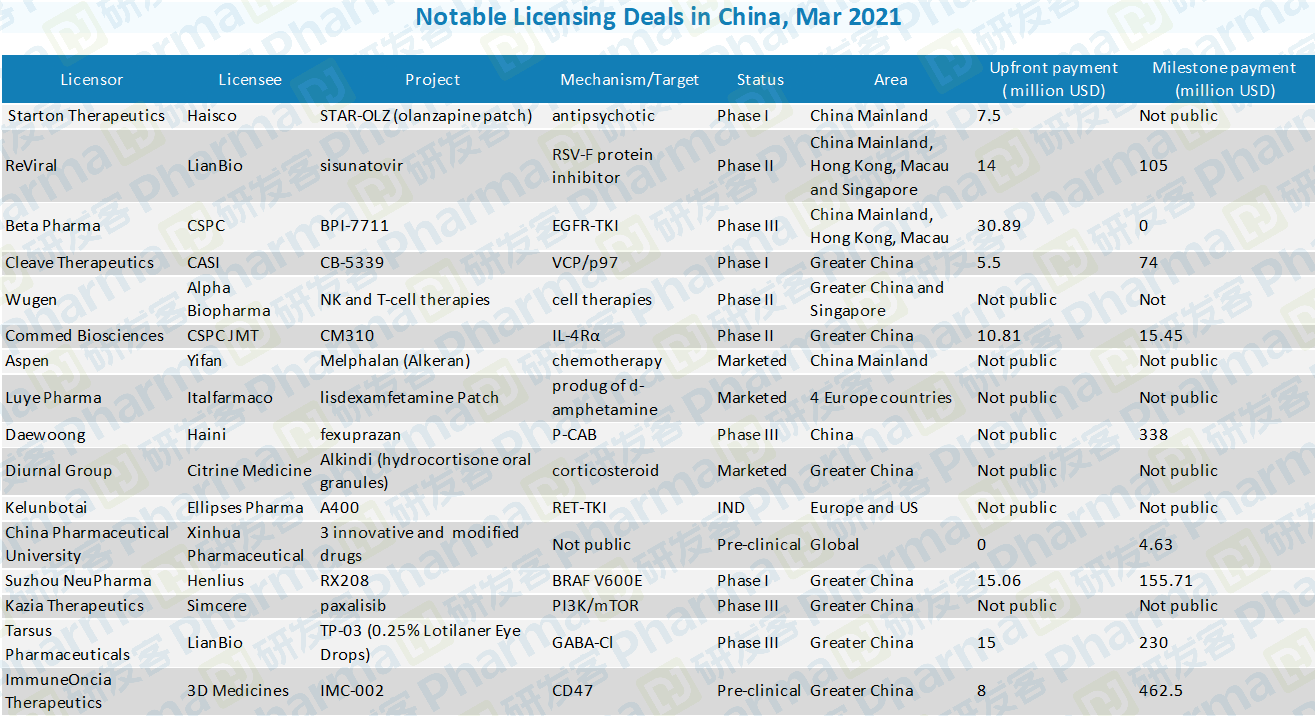 LianBio and Tarsus also inked a lucrative deal in March. As a result, LianBio has obtained the rights to TP-03 (lotilaner ophthalmic solution, 0.25%), a first-in-class investigational treatment,  from Tarsus. Valued at $100 million, the contract includes a $15 million upfront payment and up to $185 million in development and commercialization milestones as well as tiered low double-digit royalties based on sales. TP-03 is in development for the treatment of eye conditions, including demodex blepharitis and meibomian gland dysfunction (MGD).