Yescarta (axicabtagene ciloleucel), the autologous CD19-directed chimeric antigen receptor (CAR) T cell therapy developed by Kite Pharma, a subsidiary of Gilead Sciences, was approved as the therapy for adult patients with relapsed or refractory large B cell lymphoma (please add the link: China Approved its First Cell Therapy). This is the first cell therapy product to get the license from drug regulatory authority. The rights of development, manfuacture and commeralization of Yescarta in China market belong to Fosun Kite, a joint venture between Kite and its Chinese parter, Fosun Pharma.

· BMS’ dual immunotherapy combination of nivolumab (Opdivo) and ipilimumab (Yervoy) was approved for use in the frontline treatment of adults with unresectable non-epithelioid malignant pleural mesothelioma.

· Obinutuzumab, the recombinant type II anti-CD20 and immunoglobulin G1 (IgG1) Fc-optimized monoclonal antibody (mAb), which was developed by Roche, was approved. It is labeled in first-line follicular lymphoma (FL) with chemotherapy as the maintenance therapy.

· AstraZeneca and Merck’s inhibitor olaparib (Lynparza) has been granted conditional approval for patients with germline or somatic BRCA1- or BRCA2-mutated metastatic castration-resistant prostate cancer who have progressed after hormonal treatment with enzalutamide (Pfizer/Astellas' Xtandi) or abiraterone (Janssen's Zytiga). The drug was first approved in China in August 2018.

Five PD-1 and one PD-L1 antibodies expanded their labels with new indications.

· Sintilimab from Innovent was approved to be used as a first-line therapy for squamous non-small cell lung cancer (NSCLC).

· Roche’s atezolizumab was approved to be combined with pemetrexed and platinum-based chemotherapy as a first-line therapy for EGFR/ ALK negative metastatic non-squamous NSCLC.

· Sintilimab was approved to be combined with bevacizumab for unresectable or metastatic hepatocellular carcinoma (HCC).

· Tislelizumab was also approved to treat HCC patients who have received perivous therapy.

· Hengrui’s camrelizumab was approved as a first-line therapy for NPC combined with chemotherapy. 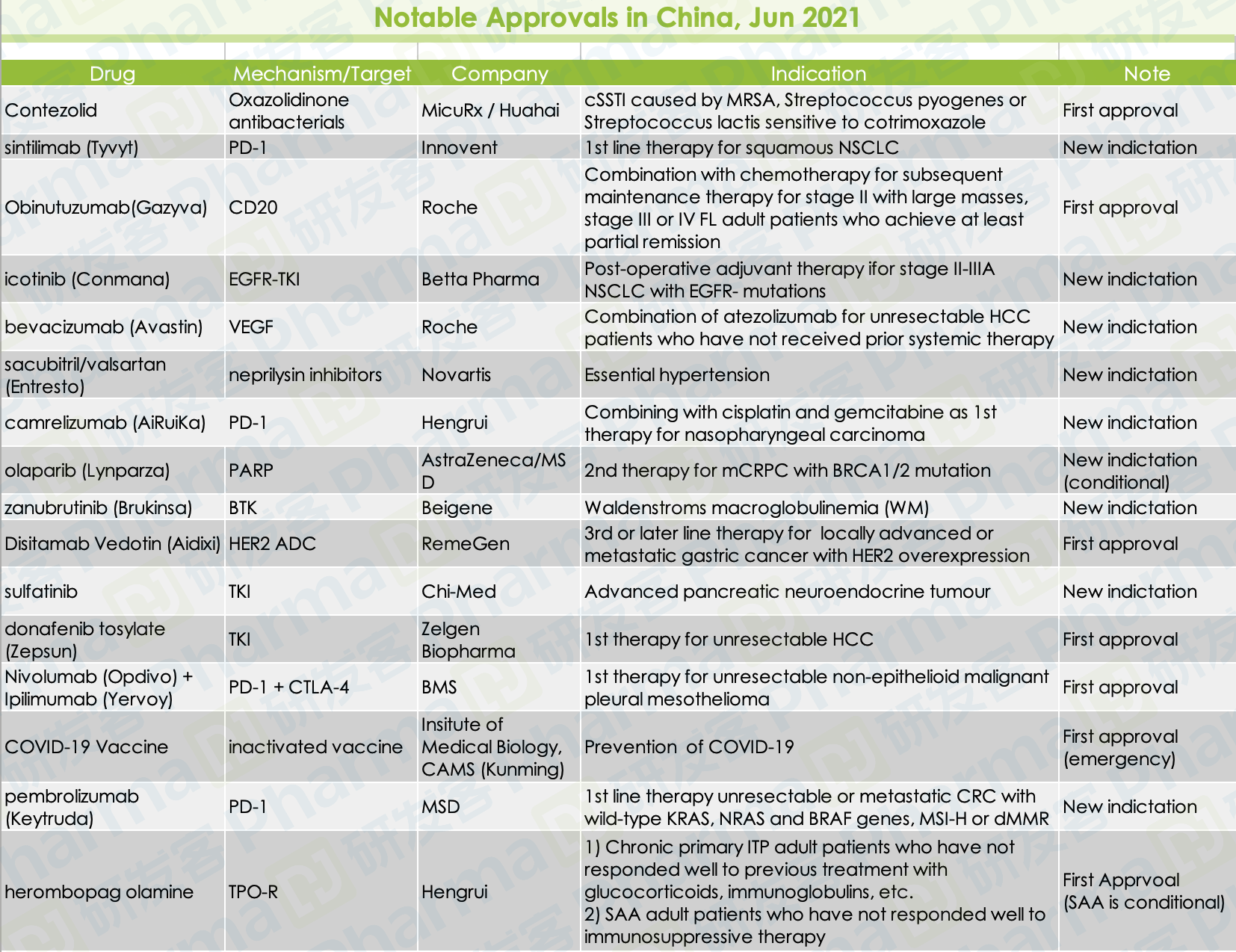 There are also two important applications for expanding the labels.

Blueprint and its Chinese partner Cstone submitted applications for the RET inhibitor pralsetinib as a first-line theary for RET postive NSCLC patients. Currently, it is approved for use as a second-line thearpy.

Additionally, Beigene is looking to expand the lablel of its tirelizumab to be a second-line therapy for locally advanced unresectable or metastatic MSI-H or dMMR solid tumors.